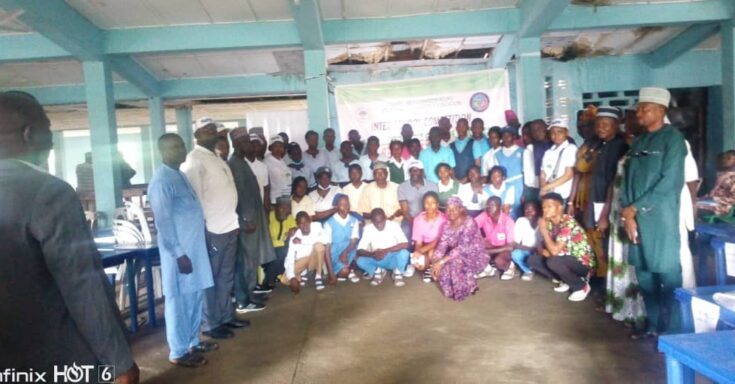 The Ebira Community Secondary School (ECSS) Ogaminana in Adavi Local Government Area of Kogi State on Saturday emerged the winner of the inter-school quiz competition in the Central Senatorial District of the State.

The State’s Commissioner for Education, Science and Technology, Hon. Wemi Jones in his remark, commended PAAYEF for heeding to the ministry’s clarion call to support education development in the state.

He said that His Excellency, Governor Yahaya Bello, believed very strongly in revamping education in the state, and had committed energy enormous resources to the project.

According to him ”As ministry, we have been reaching out to organisations and well spirited individual to come and collaborate with us and the result is what we are witnessing today

”We are highly favoured to have participation of NGOs and public spirited individuals who are coming to support and collaborate with the ministry”, he said.

The Commissioner therefore commended the Chief of Staff to the Governor and founder of PAAYEF, Pharmacist Abdulkareem Asuku for using his resources to support education through the statewide interschool competition.

He noted that there was a stiff competition among the schools in the Eastern Senatorial District held at Anyigba last Saturday, saying, ”I am expecting a stiffer competition in Okene today”.

He encouraged the students after they might have completed their schooling and became successful in their careers, to also come back to replicate the same gesture as it was being done by PAAYEF.

On her parts, the Foundation’s Focal Person, Hon. Sandra Musa, said the competition was sponsored by PAAYEF to facilitate access to quality education and open opportunities for students across Kogi State.

She stated that the participating schools in the competition were selected by the ministry of education based on their past academic records without any form of external influence.

According to her, a total of eleven schools, comprising two from each of Adavi, Okehi, Ajaokuta and Ogori/Mangogo, and three schools from Okene Local Government Areas, were selected for the competition in Kogi Central, with three students from each school.

The focal person added that the competition for the Western Senatorial district, would hold on October 9, at Saint Augustine College, Kabba.

She mentioned that the best three schools in each senatorial district will proceed to Lokoja for the final round of the quiz/essay competition where overall winners would emerge, stating that the student who emerged overall best at final competition in Lokoja, would get full scholarship to university level, while the 2nd and 3rd positions to get scholarship for secondary education including payment for WAEC and JAMB, and a year scholarship respectively.

She added that PAAYEF would also give awards and gifts to all participants and schools that made it to the final round in Lokoja.

A student of Ebira Community Secondary School (ECSS) Ogaminana in SS3 who participated in the competition, Shuaibu Abdulmalik, thanked PAAYEF for sponsoring the completion to boost their morale.

“I want to also encourage our parents to enrol their children in public schools, because as public school, we took first position in the inter-school quiz competition today”, Abdulmalik said.

It would be recalled that Government Secondary School Okenya, Igalamela/Odolu LGA, emerged first; St Peter’s College Idah came second, while Our Lady of Schools, Anyigba, took third position, at the competition for eastern senatorial district held in Anyigba on August 25.

Three schools would represent each of the three senatorial districts at the grand finale of the competition in Lokoja at a fix date not yet announced.