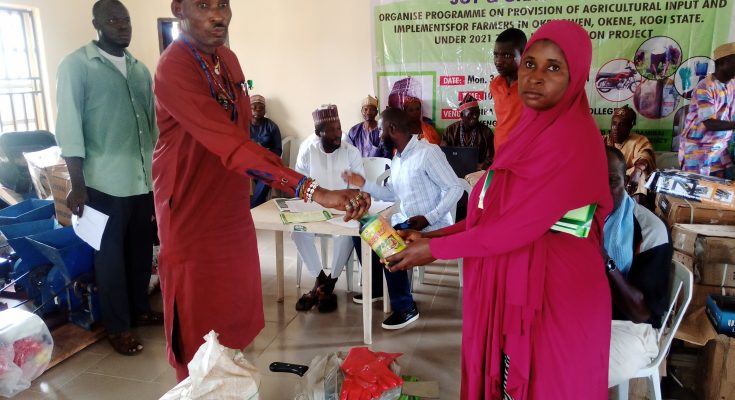 The Executive Director, National Cereal Research Institute (NCRI) Badeggi, Dr Umar Aliyu has identified agriculture as the only quick way to address unemployment, youth restiveness in the country, urging government at all levels to prioritize the sector.

The 3-day programme which ended on Wednesday was  held at Ebira Muslims Community College Okengwe (EMCCO) in Okene local government area of the state and was organized by the Federal Ministry of Agriculture , Rural Development and  National Cereal Research Institute (NCRI) in collaboration with
Joy and Grace Limited.

Speaking at the end of the empowernment programme, Dr Aliyu said the only way youth restiveness , unemployment and insecurity can be addressed in the society was through rigorous empowernment and engagement of youth through various agricultural value-chains that can impact positively on the livelihood of the youth.

The Executive Director who was represented by the planning officer of the institute Mr Lukman Bello stated that the empowernment programme which involved the distribution of agricultural input and implements to farmers in the constituency would go a long way in improving the living standard of the beneficiaries.

He therefore appealed to political office holders and representative of the people at both state and federal level to extend such gesture to the people at the grassroots to improve their standard of living.

Addressing the beneficiaries , Hon. Tijani Damisa who was represented by one of his aides Ibrahim Kadoka said the aim of the empowerment was to fulfil the lawmaker’s campaign promises of empowering the constituents to boost their businesses and create jobs for them.

He stated that 100 farmers were supported with input such as fertilizers, sprayers, rain boot, face mack’s, hand gloves and seedlings as starter packs while another 100 petty traders received cash to boost their businesses.

One of the beneficiaries and a petty trader Mrs Fatimat Sule commended the effort of the lawmaker for wiping away their tears at the point of needs and appealed to corporate organisations and well meaning indegenes of the constituency to contribute their quota toward ensuring that youth and women are supported to have sources of livelihood.