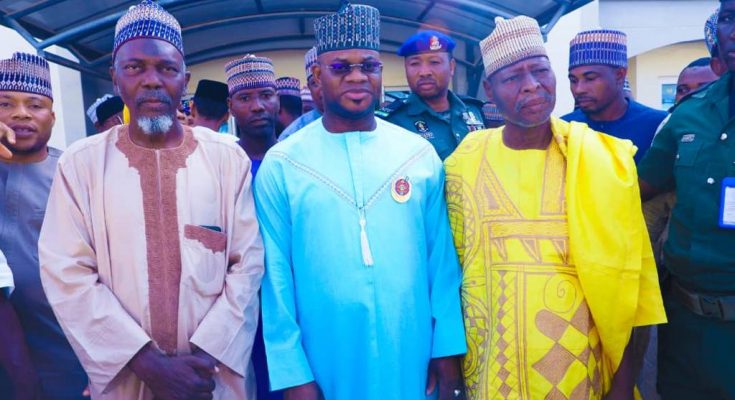 A delegation from Daura, President Muhammadu Buhari’s hometown in Katsina state, has lauded the Kogi State Governor, Yahaya Bello for his unalloyed support of the President.

The group of tradition and political stakeholders from Daura paid a courtesy visit to Governor Bello on Thursday.

Speaking through their spokesperson, Engineer Mato Daura, the delegation noted that Governor Bello’s love for the President has been unprecedented and that through his close relationship, certain virtues and values have been imbibed.

Mato also urged Governor Bello to throw his hat into the ring in the forthcoming 2023 general election, assuring him that the group would throw their weight behind him as their most preferred candidate.

In his response, the Governor thanked the delegation for such encomium poured, adding that only an ingrate would not appreciate the work of President Buhari.

He stated that from history, the President has been sacrificing and has continued to do the same for the safety and emancipation of the country from his military rule to his current time as the civilian head of the country.

The Governor mentioned that the President is one of those leaders who do not have an account or properties offshore, adding that even while on the sick bed he never ceased to seek the good interest of the nation.

“He fought the civil war to keep the country together and has been part and parcel of the Nation’s integration and everyone who is his loyal follower must do everything to ensure that his succeeds as his success is not for himself but for the country,” Governor Bello said

He also acknowledged the President’s efforts in grooming the younger generation for leadership in the next electioneering season.

“It would be a worthy honour to take up the challenge to succeed the president based on the calls being made by many Nigerians,” the Governor concluded.