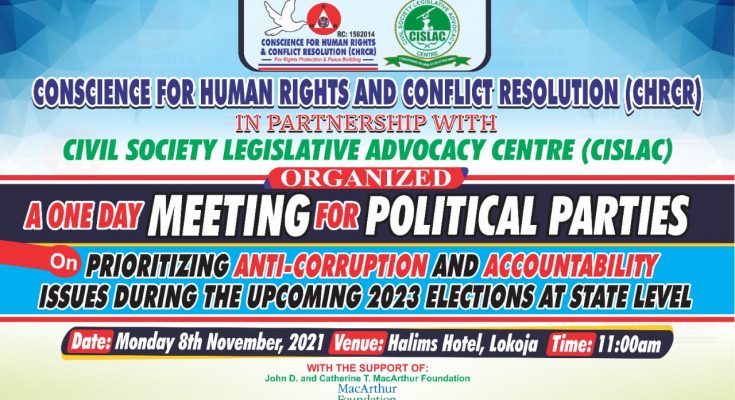 Political parties in Nigeria have been charged to incorporate Anti-Corruption and Accountability in their manifestos to pave rooms good governance in the country.

The charge was part of the recommendations in a communique signed by Executive Director, Conscience for Human Rights and Conflict Resolution (CHRCR), Comrade Idris Miliki Abdul in Lokoja on Monday after a stakeholders meeting involving political parties in the State.

The 1-day Meeting for Political parties with the theme ” Prioritizing Anti-Corruption ana Accountability Issues Towards 2023 Elections” was organized by CHRHCR in partnership with Civil Society Legislative Advocacy Center CISLAC with support from John D., Carherine T. and MacArthur Foundation.

Other items contained in the Communique include: “That there is need for Political Parties to put in place deliberate strategies for the inclusion of women in key Elective and appointive positions in the Party activities and programmes.

– There is needs for increased levels of awareness creation for women and other stakeholders on inclusive political party participation.

The 1-day Meeting was organized to provide a platform for interaction between the Civil Society, Media and INEC recognized Political Parties on issues on Anti-Corruption and Accountability in Elections towards the 2023 Elections at State Level in Kogi State.

The meeting had in attendance, Political Parties, selected Media Organizations and Practitioners, featured presentations on the Goals and objectives of the Anti-corruption project, Question and Contributions sessions, development of Citizen Impact Scorecard, Community Questionnaire on Prioritizing Anti-Corruption and Accountability issues towards 2023 Elections.

The Meeting observed that:

1. Political Parties are Constitutionally the only recognized platform for contesting Elections in Nigeria.

2. There has not been a vibrant relationship between the Civil Society and Political Parties in the past especially on issues of Anti-Corruption and Accountability in Elections.

3. Inclusion of Vulnerable groups and Gender Equity in Political Party positions, is still a challenge within most Political Parties.

4. Awareness of Women in Politics is a major constraint to their effective participation in Party Politics.

5. Political Parties and their Candidates have most often than not do not keep to their campaign promises and this is one of the reasons for disenchantment of the citizens in governance and trust among the citizens in participating in political party activities.

6. Intimidation and actions by major political parties on their campaigns strategies and activities during elections discourage better collaboration among other political parties in the smooth running of governance that can lead to reduction in Corruption, that can promote Accountability in Governance.