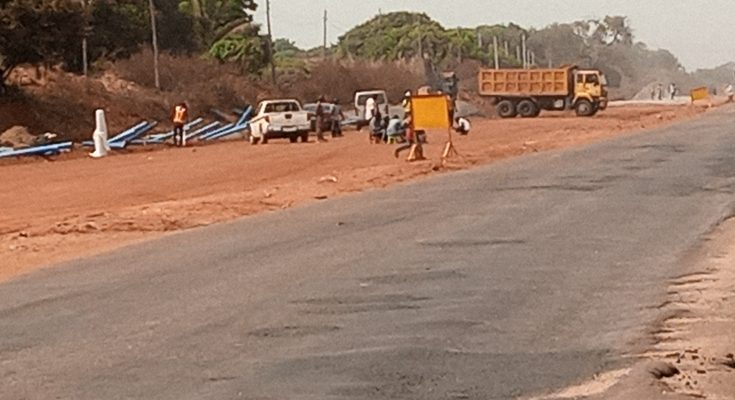 Kogi State Government has appealed to the Federal Ministry of Works to provide palliative for Murtala Mohammed Bridge Jamata and dangerously potholes along Lokoja -Koton-Karfe -Abuja road to avoid gridlock during the yuletide period.

The Special Adviser to the Governor of the state on security matters Jerry Omadara who made the appeal while on inspection of the road from Lokoja down to Gegu Baki, observed that the road and the Murtala Mohammed bridge need urgent intervention to ameliorate the suffering of the motorists who will transverse the road during the yuletide season.

According to him, the Kogi State Governor Yahaya Bello is worried over the current sad state of Okene-Lokoja-Abuja road which is a highways under the care of the federal government, noting that Governor Bello and the three senators from the state have visited the Minister of works Rashid Fashola on several occasions with a view for the quick repairs of the road.

He stated that for many years, the road has experienced vehicular movement of about twelve thousand (12,000)vehicles on daily basis plying the road , stressing that during the yuletide period number of vehicles plying the road is expected to increase tremendously.

He noted that the bridge , road connecting Koton Karfe and Gegu Baki down to Abaji are also in bad condition and expressing fears that the situation will definitely increase security challenges in the state.

He appealed to the federal ministry of work to mobilize the contractors back to site before 12th of this month to fix the road , saying as from on 15th December the vehicles that will ply the road will be much and it can cause gridlock that will be difficult for security agents to provide adequate security of life and property to motorists passing through the state.

The Kogi State FRSC head of operation Adeyemi Adeleke , stated that the road from Lokoja-Koton Karfe -Abaji and the Murtala bridge has already posed major concern to the state government and the commuters and appealed to federal government do a palliative on the bridge so that vehicles can pass through the two lanes to avoid gridlock during this year Yuletide season.

While charging travellers to slow down when approaching potholes, maintain their lane , reduce speed and obey all the traffic rulers and regulations including adherence to road signs, he identified spots in Koton-Karfe, Banda, Ganaja where the traveller should take caution when passing through the spots.

He assured that the FRSC will try its best to ensure that the road is free of gridlock this December to enable travellers
enjoy their journey this years.

Madaki Musa a commuter lamented that in the last eight years the road was under repairs and wondered why till now it is not completed.

He stated that the bridge is already a death trap to motorists , stressing that potholes has been damaging people’s vehicles and It is already a risk to pass through the road especially at night.

He appealed to federal government to do the needful to make the road safe for the people.