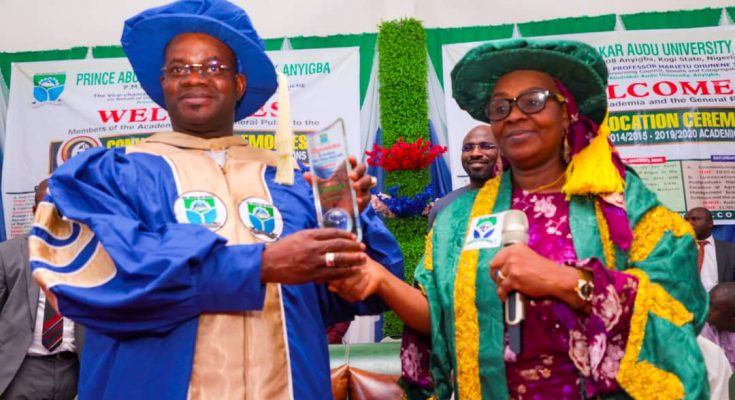 The Governor who is the visitor to the University, gave the directive during the 6th convocation ceremonies of the institution, noted that the Vice Chancellor has demonstrated high level of probity and accountability in the management of the resources of the university.

ALSO READ:  2023: I Will work for a greater Niger - Malagi ... Returns nomination forms

“You have demonstrated what this administration stands for which is probity , accountability and prudent utilization of resources. You have also demonstrated good leadership.

“The achievement recorded by the VC could not have been fruitful without the cooperation and support of the Governing Council, Staff and students of the university and as such I appreciated their collective efforts.

“Just within one year as substantive Vice Chancellor you are able to execute projects that have direct bearing on the life of the students and staff including 100 per cent accreditation for the course you offered in this university.

Professor Tenuche who is the first female Vice Chancellor of university stated that the graduands were from various departments and at different levels, Phd, Masters, Post graduate, graduate and diploma programmes of the University.

However, Kogi State Governor Yahaya Bello was among the awardees of honorary degrees (Honouraris Causa) for his development stride in Education while Senator representing Kogi East Senatorial district, Senator Isah Jibrin Echocho and a Kaduna based industrialist , Alhaji Dahiru Barau Mangal also received the awards for their various contributions to education