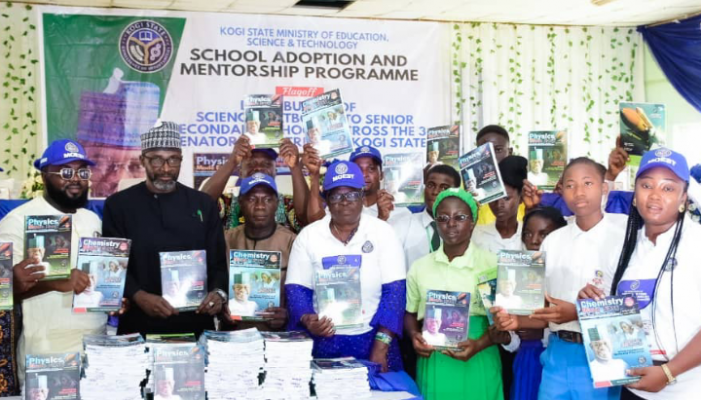 Kogi State Commissioner for Education, Science and Technology Hon. Wemi Jones has expressed the determination of the state government not to leave any stone unturn in its quest to ensuring that quality education is delivered at all levels in the state.

Hon. Jones stated this on Thursday during the final distribution of chemistry and physics textbooks for public secondary schools in Kogi western senatorial district of the state under the schools adoption and mentorship programme of the state’s ministry of science and technology.

The textbooks which was distributed to 95 senior secondary schools at Saint Augustine College , Kabba in Kabba-Bunu local government area of Kogi state was sponsored by Alhaji Usman Ahmed Ododo the Auditor General of local government to enhance the studies of science subjects in the state. 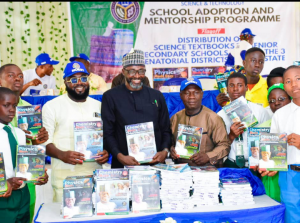 According to him , the world is concentrating on science , saying that was the reason Alhaji Usman Ahmed Ododo took the bull by the horn in sponsoring the distribution of over 11,000 chemistry and physics textbooks to all public senior secondary schools across the three senatorial districts of the state.

“Kogi state is going the way of Science, Technology, Engineering and Mathematics (STEM). This is the first intervention in the state and I remain eternally grateful to the sponsor of the two textbooks .

“We have recorded a lot of progress in tertiary institutions in terms of infrastructure development and staff welfare, we are now focusing on secondary schools and thereafter we will move to basic educational level.

“I am assuring you that whatever we can do to return schools to its era where children of primary schools can speak good English and write beautifully we will do it.

While cautioning principals of schools against selling the books , the Commissioner said the ministry of education, science and technology has set machinery in motion to check and apprehend whoever sell the textbooks, warning that any body arrested for such offense will be prosecuted without mercy.

In her goodwill message, Hon. Deborah Alabi Senior Special Assistant to the governor on teaching regulations, said the school adoption and mentorship programme is a brain child of the Commissioner for education aimed at turning around the fortune of basic education in the state.

“I want the students to bear in mind that all these effort put in place by government and spirited individuals is to assist them to achieve success in their external examinations. I am therefore urging you to justify this effort by reading the textbooks” he said.

Also speaking, the Kogi State Chairman, Academic Staff Union of Secondary Schools, (ASUSS), Comrade Ronti Ojo appreciated Governor Yahaya Bello for his passion and commitment toward upliftment of education that was at the verge of collapse before the current administration.

Ojo who commended Alhaji Usman Ahmed Ododo for his effort in impacting positively on the people of the state, lamented that many elective and appointed politicians have failed in their responsibilities to deliver dividend of democracy to the electorate.

He stated that in the past government had the capacity to attend to the needs of schools adequately, noting that nowadays due to competitive demands government can not provide enough funds for basic education system.

He therefore , called on spirited individuals and corporate organizations in the state to contribute to the development of education sector.

“I am urging corporate organizations in the state to key into the school adoption and mentorship programme to move the system forward” he advised.

Engineer Yusuf Ibrahim a lecturer with Federal University of Technology Minna, Niger State who spoke on behalf of the authors of the two books said without science and technology there can never be development, adding that the two books; chemistry and physics made easy was simplified for easy reading and assimilation of the contents to enable the students excel in their studies.

He charged the teachers to dwell much on the vocational aspect of the chemistry textbook to enable the students acquire the skill of soap, Vaseline, candle, matches, cream production among others.