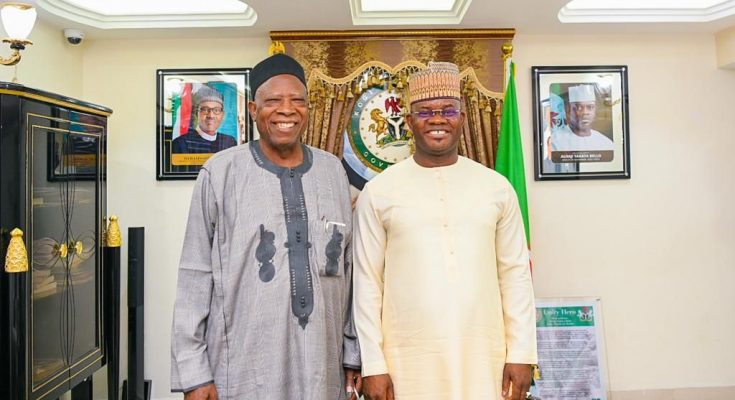 Senator Adamu said Governor Bello has in the last five years tamed insecurity and has provided good leadership for the people of Kogi state while he has also excelled in the provision of infrastructure in the health and education sectors.

Senator Adamu who paid a courtesy visit to Kogi Governor in Abuja Saturday evening urged Bello not to relent in his effort in providing good governance for the people of the State.

While commending the elder statesman and senior legislator for honouring him with the visit, Governor Bello eulogized Senator Adamu for laying a solid foundation for the transformation of Nasarawa State being the first elected governor of the state between 1999-2007.

Bello noted that Adamu as a former Governor and serving Senator has contributed immensely to the development of the country’s democracy and legislative framework and thanked him for his wise counsels to young leaders.

Recall that Senator Abdullahi Adamu on 13 September 2021 reacted to the zoning agitation by political parties ahead of the 2023 presidential election describing such arrangement as unconstitutional.

Senator Adamu said the idea of a power shift to the South in 2023 was wishful thinking.

He maintained that since the idea of zoning was not in the nation’s constitution, every eligible Nigerian was free to contest the 2023 presidential election regardless of his or her state of origin.

He said, “Nowhere in the Nigeria constitution says we should zone any public office.

“There is federal character, but not that parties must zone positions for the presidency during the election.

“The constitution is being reviewed. If you want a specific provision that presidential positions be zoned, you say it and tell us how you want it to be zoned”. the Senator said.