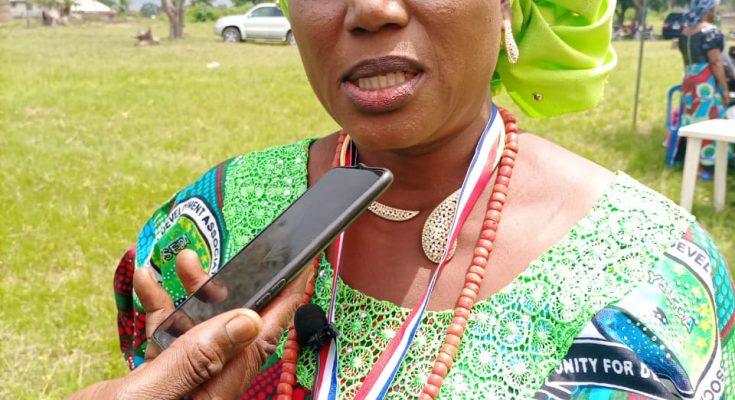 According to her, SEYDAW is a sociocultural association with over 500 active members is working to promote unity, oneness, development and progress amongst womenfolk of the district.

She added that SEYDAW support self help programmes through skills acquisition training and self help projects to reduce poverty amongst the girl-child and the women in general.

Joel noted the association have been supporting girl-child education and women empowerment, campaign against discrimination against girl-child, reintegration and support for teenage mothers, and promotion reproductive rights.

She explained that the association had established Women and Youths Development Centre where 27 persons had been trained in three vocations, such as Soap making; Bedspread, duvet and throw pillows; and Catering services.

She added that at the end of the training, the beneficiaries were also empowered with startup interest free loans depending on their various vocations.

According to her, a sum of N330,000 cash was given as revolving loan and seven sewing machines worth N378,000 were also distributed to trainees.

She said the association had also established a Multipurpose Corporative Society where members were seriously benefitting, and Traders’ Support loan to assist petty traders to boost their businesses.

She added that a total of 38 people had benefitted from the scheme, while appreciating everyone who has contributed to support the association.

She noted that SEYDAW was also collaborating with an NGO, Dare Venza Foundation to carry out empowerment programmes for widows and students, to reduce their level of hardship.

The women leader appealed to the Governments at all levels for adequate protection of the people from all vices of crimes and criminal tendencies across the state.

”We also look forward to the government to work on our roads to ease our movements and the stress of farmers in transporting their goods to markets outside their immediate communities”, she said.

While appreciating the Government for their efforts to improving standard of education in the state, she appealed for adequate provision of teachers and equipment in their schools.

In his remarks, the Chairman, South East Yagba Development Association (SEYDA), Amb. Sola Enikanolaiye, commended SEYDAW for showing that women were no longer to be consigned and confined to the sidelines and the background of the development trajectory.

He congratulated the association on the giant strides and milestones they had already recorded in terms of empowerment, training, capacity building, mass mobilisation, and high visibility of women and girls of the communities.

The ambassador stressed that SEYDAW had clearly demonstrated that the womenfolk were fully prepared to serve as veritable partners for the promotion of sustainable development, unity, peace and progress of the people.

”I have no doubt that the success to be recorded by this Congress will surpass the previous ones such that we can together take SEYDAW to loftier heights, going forward”, he said.

He, therefore urged them to remain steadfast in the pursuit of their chosen mandate, goals and objectives irrespective of any form of challenges and distractions.

Earlier, the Chairman of the occasion, Mr Jide Salau, the Managing Director of KABSAL Cargo, Nigeria Limited, commended SEYDAW for their commitment to the implementation of women empowerment scheme, demonstrated through their lives and work towards the empowerment and poverty alleviation initiative.

All the dignitaries and the traditional rulers commended the association for the gesture and assured them of their total support in achieving the association’s goals and objectives.

The highlights of the occasion were the cultural dance, community parade, and presentation of award to some personalities based on their numerous contributions to women’s upliftment and humanity in general.

SEYDAW had in 2019, donated books and instructional materials including 55 Magnetic writing boards with its accessories to schools and facilitated training for women in the area under National Directorates of Employment (NDE).

SEYDAW’s Day and Fund Raising is an annual event with members from 14 communities of the South Eastern part of Yagba East LGA of Kogi State.