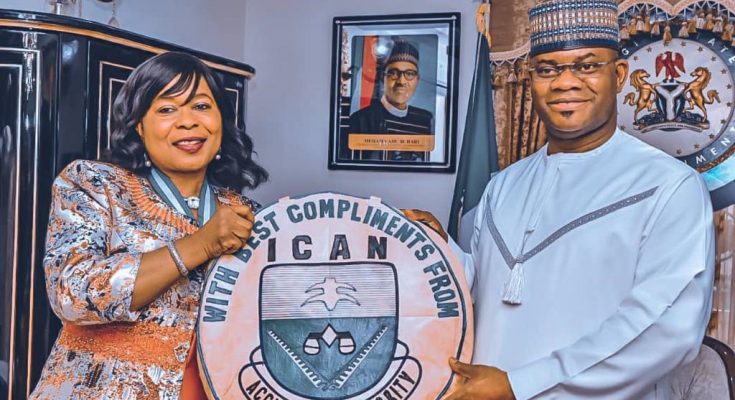 The Institute of Chartered Accountants of Nigeria (ICAN) has acknowledged the improvement of Kogi State on its ICAN’S Novel Accountability Index (ICAN AI) revealing that the state moved from 12th to 7th position in its 2019 assessments.

The institute made this known on Thursday through The 56th president of the accounting body in Nigeria, Mrs Comfort Olujumoke Eyitayo , CFR, CFA, FCA during a courtesy visit to the state governor while she added that such improvement was worthy of note and signaled a better ranking in the future

She noted that ICAN AI was a tool for assessing the three tiers of government on their level of adherence to best practices in public finance management while she appealed that relevant Ministries, Agencies and Departments should continue to provide relevant documents for the forthcoming assessments.

The president opined that the launch of Kogi state Open Governance and Accountability System (KOGAS) would impact positively on the state’s ranking of ICAN’S AI noting that the feet has been acknowledged as an objective tool from stakeholders within and outside the country.

She expressed her leadership’s resolve to make ICAN great again through visible impact not only in accounting but in the nation’s economy at large adding that it was poised to deepen such impact particularly in the aspect of promoting transparent and accountable leadership across all spheres of government.

Mrs Eyitayo urged the governor to lend his name to the ill informed decision by the National council on Establishment that Professional Certificate would no longer be accepted as entry qualification into any cadre in Nigeria’s civil/public service.

Eyitayo stressed that as against the false narrative of the Institute’s being Pro Southern region, ICAN through several initiative was committed to ensuring that the Northern state provided as many chartered accountant as possible for the region and the country as a whole adding that just like other states in the northern region, Kogi state should create an ICAN special students centre while soliciting for the construction of the institute’s secretariat by the state government.

In his response, Governor Yahaya Bello thanked ICAN for finding him worthy of the award and also expressed joy about the rating of the state’s accountability Index. He said the award would only spur him to do more noting that whatever his administration has achieved in the state today was not a miracle as such was a deliberate, orchestrated plan to give the best to the people of the state.

Why responding to the call by the National council on Establishment that Professional Certificate would no longer be accepted as entry qualification into any cadre in Nigeria’s civil/public service, Bello stated that his view on that call was different, noting that all over the world today, engagement of professionals in the day-to-day runnings of the affairs in both private and public sectors cannot be overemphasized. He charged ICAN to remain committed in deepening accountability and transparency in both public and private sector.