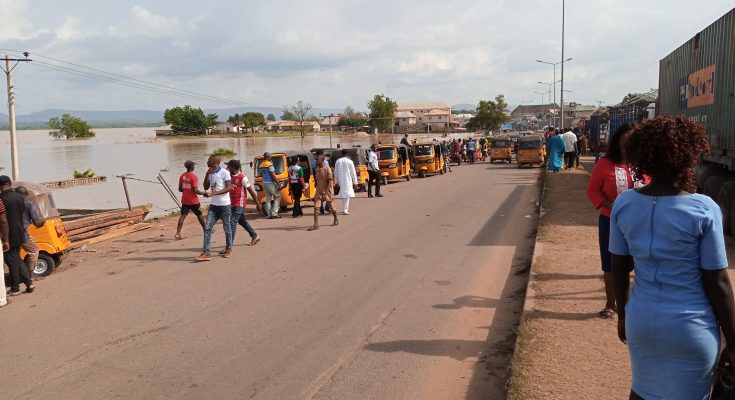 Commuters plying Lokoja – Ajaokuta -Enegu road have appealed to Kogi State Government to divert the road in order to avert unnecessary blockage of the road that often causes hardship to travellers.

The road according to Ibrahim Sani a resident of Gadumo , explained that the road remained blocked since Tuesday 2 a.m on Tuesday when staff of Kogi State Internal Revenue Service allegedly flag down some trailers passing through the road to the eastern part of the country with a view to collect tax ,but the drivers of the trailers refused to stop.

Sani further explained that the revenue officers in an effort to force the vehicles to stop punctured three tyres of the trailers tyres and condemned the rims.

He stated that , in an attempt to expressed their displeasure over what they term as ill treatment, the trailer drivers used their vehicles to blocked the road at Gadumo community in Lokoja causing uncontrolled gridlock along the axis,adding that the drivers vowed that they will not vacate the road until the tyres and the rims are replaced and the road remained closed since morning.

Field operation officer , Federal Road Safety Commission Mr Adeyemo said the road block due a skirmish between the state revenue collectors and the trailer drivers that led to puncturing of three tyres of the trailer.

He said by traffic law no body has the right to blockage the road , saying the trailer drivers have erred by blocking the federal road, noting that the revenue officers have no right to block the road for the purpose of collecting revenue.

He stated that one of the revenue collectors has been apprehended and taken to police custody for prosecution, noting that they have interface with the management of the revenue service and have agreed to buy the damaged tyres and the rims for the trailer drivers to enable them open up the road for commuters to pass.

A truck driver Usman Abubakar said this is not the first time the revenue officers treat them as if the drivers are not Nigerians, he added that within Kogi State several revenue agents force them to pay tax at every point in the night .

He called on government to intervene by regulating the revenue collection points within the state , saying trailer drivers are always subjected to humiliation whenever they pass through the state in the night.

Yunusa Usman another truck driver urged government to focus on monitoring of the road , saying the road connected the north and the east and should not be allow to be having crises all the time.

Most of the drivers who are already trapped in the gridlock complained vehemently that their perishable goods such as tomatoes, onion and red pepper have started losing values as a result of the ugly situation.