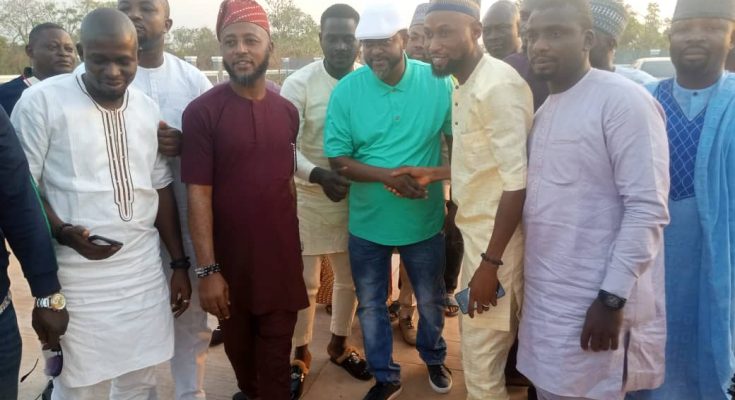 The Deputy Governor of Kogi State and the Grand Patron of YES GYB2PYB FOUNDATION Chief (Dr) Edward David Onoja has charged members of the Foundation to be committed for the cause of ensuring that Governor Yahaya Bello contest and win the 2023 presidential election.

His Excellency Chief Onoja gave the charge on Friday when the Executive body of YES GYB2PYB FOUNDATION paid him a courtesy visit at his country home in Ogugu, Olamaboro local government area of Kogi State.

The Deputy Governor who was full of praises to the platform for the visit , charged members of the Foundation to be committed in the pursuit of the objective of supporting the cause of GYB2PYB project.

The Grand Patrol without mincing words promised to support the Foundation in all its activities and seek the doggedness and cooperation of members of the platform, saying with unity and common understanding every set objectives can easily be achieved.

“I am using this opportunity to thank you for the visit. I will support this platform whole heartedly, but members should be committed and work together as one indivisible entity devoid of any sentiment because in Kogi State we see ourselves as one” the Grand Patron advised.

Earlier in his speech , the National Coordinator , YES GYB2PYB FOUNDATION Comrade Abdullahi Muhammed Jemilu thank His Excellency the Deputy Governor of Kogi State for granting the Executive of the platform, the opportunity to pay a courtesy visit on him.

Comrade Jemilu explained to His Excellency that the foundation was established by young men and women principally to champion the cause and aspiration of His Excellency the Executive Governor of Kogi State Alhaji Yahaya Adoza Bello to run and become the next President of Nigeria by the special grace of God Almighty.

ALSO READ:  CAN condemns attacks on worshipers in Kogi.

“Sir, it will interest you to know that the membership of YES GYB2PYB Foundation cuts across all part of the country with Regional , States, Local Government and Wards Coordinators already in place and saddled with the responsibilities of coordinating the affairs of the platform toward achieving its objectives.

“Your Excellency sir, this Foundation made bold to say that after a critical analysis of the political situations in the country and the need to have a credible, dependable and reliable president that will take over and continue the legacies of His Excellency, President Muhammadu Buhari come 2023, we are passionately calling on the Executive Governor of Kogi State, His Excellency, ALHAJI YAHAYA ADOZA BELLO to run for the office of the president of the Federal Republic of Nigeria in the forthcoming 2023 presidential election.

“This plea Your Excellency has become necessary due to the fact that Nigeria needs a President that will salvage us from the shackles of poverty, corruption, unemployment, underdevelopment, and above all the high level of insecurity that has constituted a cog in the wheels of development of the country.

“We are also bold to say that we have much confident in the ability of His Excellency Governor Yahaya Adoza Bello to put an end to Boko Haram insurgency, Banditry, kidnapping and all other forms of criminal activities the way and manner he, with your support handled security situations in Kogi state that today the State is been adjudged as the safest and peaceful state in Nigeria” he stated.

ALSO READ:  2023: APC chieftain asks Nigerians in Diaspora to support Tinubu’s emergence ….Urges INEC to organize process for those in the Diaspora to vote

He noted that Governor Yahaya Bello has shown to the world that he (Governor Bello) is capable of uniting this nation, stating that the Governor has demonstrated that in the choice of his cabinet members which Comrade Jemilu said made up of men and women from different parts of the country and different tribes.

He added that Kogi State under the leadership of Governor Yahaya Bello is the only state in the country that has gone beyond the 35 percent affirmative for women inclusiveness in governance with majority of his appointees being youth, maintaining that
the present administration in the state has been able to turn around the infrastructural development of Kogi in the area of quality education, access to quality health , road construction, provision of portable water among other needs of the people of the State .

“Without mincing words Your Excellency , Governor Yahaya Bello’s developmental stride is unprecedented and second to non in the history of Kogi State, a major reason why YES GYB2PYB FOUNDATION will never be tired of prevailing on him to vie for the position of president in 2023.

“Your Excellency Sir, it might also interest you to know that members of this Platform unanimously resolved and appealed to you sir to occupy the position of Grand Patron for us. The letter had already been communicated to you.

“Sir, Our decision to have you as our Grand Patron was borne out of your political sagacity, leadership quality and your love for the growth and development of Kogi State and Nigeria at large which you have also demonstrated since the day you assumed office as Chief of Staff to His Excellency and subsequently as the Deputy Governor of the State.

“Therefore, we are convinced beyond any reasonable doubt that , with you occupying that position, the Political Platform will definitely grow in idea and strength that will pave rooms for the fulfilment of our objectives. Sir, we are waiting earnestly for your response in this respect sir.

“Your Excellency, This platform need offices and mobilities to facilitate its activities especially to enable us move round the 36 states of the federation including FCT to educate, sensitize and mobilize Nigerians on the need for them to join the winning team and support GYB2PYB 2023 project.

“Sir, we are also planing for our inauguration of the platform on a date that will soon be communicated to you by the special grace of God” he stated.

Comrade Jemilu thank all the members of the platform for their support and prayers that made the visit a reality.