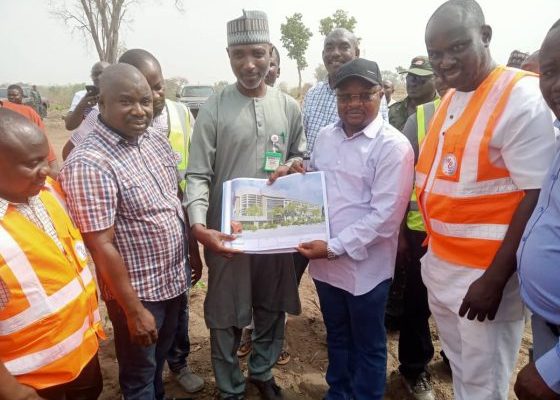 The Kogi State Government has promised to make Confluence University of Science and Technology, Osara, a world class institution of learning that will compete favourably with any university across the globe.

The State Commissioner for Works and Housing, Engr. Abubakar Ohere gave the assurance on Wednesday while handing over of seven projects sites to contractors at the premises of the institution on behalf of the state government.

Engr. Ohere who expressed optimism that the projects embarked upon by the State Government has a hundred percent of funding, said the project sites are for six faculties and the Senate Building.

“The faculties are for the building of a Laboratory, Library, School of Medicine, Faculty of Information Technology amongst others” he said.

He assured that once the issue of technicalities are resolved, the construction of projects would commence and it would be completed on record time.

He expressed confidence that the quality of work would meet with the quality and level of deployment of the infrastructure already at the university.

Engr. Ohere described Governor Yahaya Bello’s commitment to making CUSTECH a world class university as unprecedented, pointing out that the Governor has proven to be a rare gem and a National leader.

While assuring that the Ministry would not shirk in its monitoring and supervisory role, the Commissioner promised to sustain the confidence the ministry has maintained in quality service delivery.

Earlier in his remarks, Engr. Kabiru Suleiman, the Consultant to the Project, said efforts would be made to sustain the narrative of maintaining the GYB standard in the seven project like the civic centre in Lokoja and other landmark projects in the State.

Engr. Suleiman described education as live wire of developing nation, assures of frequent visits to all the seven projects towards ensuring that CUSTECH becomes a world standard for learning.

ALSO READ:  Rescue Media from the hands of quacks, hackers, Gov Bello charge practitioners
Previous PostFCE Okene At The Verge Of Becoming Federal University of Education Next Post2023 : It is the turn of Lokoja/Koton-Karfe to produce next Senator.......Group