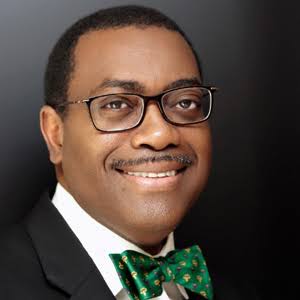 Akinwumi Akin Adesina, an Ogun State farmer’s son has been in journey of breaking bounds and stunning his world.
Apparently, not that he has been lucky but has always been the star in the field of intellectual prowess and of unique leadership qualities and skills.

Akinwumi Akin Adesina is presently the President of the African Development Bank and he is the first Nigerian to hold the post. From 1990 to 1995, Adesina served as senior economist at West African Rice Development Association (WARDA) in Bouake, Ivory Coast.

He was Vice President of Policy and Partnerships for the Alliance for a Green Revolution in Africa (AGRA). He served as Minister of Agriculture and Rural Development under his then boss, President Goodluck Jonathan.

None of those heights mentioned and those not mentioned that Adesina attained till the present day failed to feel the waves of his intellectual imparts and influence. His journey through the path of becoming whom and what he is today has proven to be of great benefit and asset to any developed, developing and underdeveloped society.

After his subsequent advanced knowledge acquisition in the United States (U.S), his selection at the Rockefeller Foundation, a post doctoral fellowship, Adesina was launched to global stage of recognition.

Addressing WorldFolio in 2012, Adesina articulately expressed a philosophy that moved him to uphold the emergence of more agricultural millionaires and billionaires in Africa.

Overshadowed by the nation’s reliance on oil, the suffering of the agricultural sector, which lagged at growth of just 3.7 per cent in 2007, in contrast to the annual GDP growth of 8.8 per cent between 2002 and 2007 according to the International Food Policy Research Institute needed an agricultural economist like Adesina.

The incoming president, Goodluck Jonathan had not met Adesina but owing to the need of his kind, Goodluck Jonathan had to request for Adesina’s return in 2010 to deploy his experience on the soil of his fatherland. No wonder, against all odds, Nigeria survived food crises that could have hit her hard under President Jonathan due to many natural disasters that surfaced in many countries.

According to Arunma Oteh, ” In my view, we haven’t seen the kind of progress in previous years that we’ve seen on Agriculture. And that is a whole change of mindset and some very concrete results on the ground including reducing the import bill, building a value chain for rice, for cassava – the whole focus is not just on production but industrialisation.”

ALSO READ:  FROM THIRD WORLD TO FIFTH: AT 62, NIGERIA AS A BAD EXAMPLE

Considering this unique expertise, Adesina is the shining star and gift any nation in the world will dream to have for sufficiency in all needs of mankind.