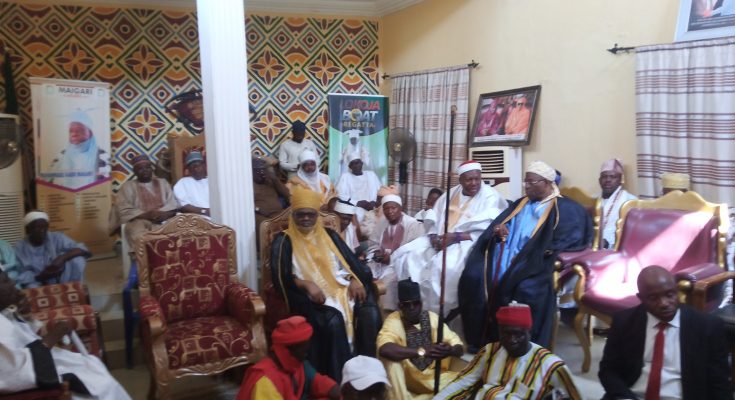 FIDAU PRAYER: Ohimege Igu charge Nigerians to live according to God’s will

The Ohimege Igu of Koton karfe kingdom and Chairman of Kogi / Lokoja traditional council, His Royal Highness Alhaji Abdulrasaq Isah-koto has admonished Nigerians to live their lives according to the will of Almighty God.

The Royal Father who gave the admonition in Lokoja on Wednesday during the seventh fidau prayer of the late
Maigari of Lokoja, Alhaji Muhammadu Kabir Maikarfi III, said time has come for people to be contented with what God has done in their life and
described the late first class monarch as a traditional ruler who accommodated and tolerated all religions.

While eulogizing the late monarch, the Ohimege said Maigari of Lokoja has left a legacy worthy of emulation and prayed to God grant him Paradise.

The Chief Imam of Lokoja, Sheikh Aminu Shaba who led the fidau prayer described the late Maigari as a devouted Muslim who had committed his time and resources in the worship of Allah, saying the late monarch lived a fulfilled life.

Shaban in his sermon , described death as a manifestation of God’s supremacy over all human beings irrespective of class, tribe and enjoined people to be conscious of the day they would render their stewardship before Allah.