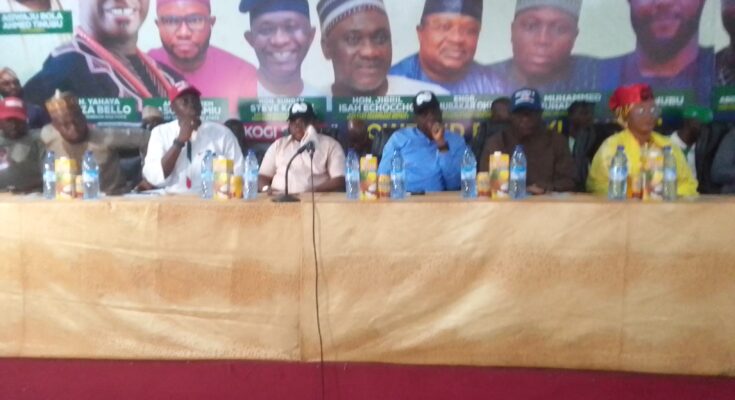 Ahead of 2023 general elections Kogi State Governor, Alhaji Yahaya Bello has called on youth and women in the state to support the emergence of someone who knows the road and can bring prosperity to their lives.

He stated that the All Progressive Congress APC candidates Senator Asuwaju Ahmed Tinubu and his running mate Senator Kashim Shettima poses the attributes of leaders that can move the country to another level of economic and infrastructure development.

Speaking on Thursday at Idrinana hotel, Lokoja venue of the town hall meeting of youth and women across the 21 local government areas of the state, Governor Bello who was ably represented by his Chief of State Pharmacist Abdulkarim Jamiu Asuku , said on human capital, economic and infrastructure development no candidate among the arrays of candidates from other political parties contesting the forthcoming presidential election that can match Tinubu’s pedegree in terms of performance.

He pointed out that the presidential candidate of APC has done a lot in Lagos when he held sway as the governor of Lagos state , saying his (Tinubu) antecedent would give him the victory to take over the leadership of the country in the month of May , 2023.

“Election is around the corner. Election in Nigeria today is local , there is no election in social media. Therefore I am urging members of our party the APC to ensure that they embark on door to door campaign so that they can galvanize votes for the candidates of the party from top to bottom” he said.

Speaking on the Muslim – Muslim presidential ticket of APC, Governor Yahaya Bello said the decision for the choice of the ticket should not be seen as being orchestrated to undermine the Christian faith.

He advised Nigerians to shun issue of religion in political activities of the country , saying search for good governance and economic development should be the concern of every citizens of Nigeria.

“Nigerians should not be afraid of Muslim-Muslim ticket. Our presidential candidate will not Islamize the country. His wife is a Pastor and he has never raise an eyebrow over it. The ticket is for development, job creation and economic emancipation of our people.

“I am advising you not to listen to opposition parties lies, they just want to deceive you , but you should bear in mind that what the nation need now is a leader that can develop the country without sentiments of religion and ethnicity”

In a paper presented by the Rector of Kogi State Polytechnic Lokoja , Dr Usman Salisu Ogbo, charged youth to take the destiny of their lives into their hands by not allowing unscrupulous politicians to use them as political thugs.

He advised them to vote for a candidate that would create jobs for the teeming unemployed youth and women , saying APC presidential candidate has been tested and trusted as a former governor of Lagos state.

Earlier in his address, the state youth leader of the APC, Comrade Muhammed Uba Muhammed, said that the massive turn out of Youths and women for the town hall meeting had reassured the party of their commitment and dedication toward victory at the end of the general elections.

“This historic gathering will offer Kogi youths the opportunity to engage those who are seeking to represent them at different spheres of government in the forthcoming general elections.

“The theme of the town hall meeting which is youth and political participation in an evolving democracy was organized by the State Youth Leader which was meant to brainstorm and strategize ahead of next month general elections.

The youth leader however, charged the youths to put more efforts in mobilizing party faithful to boost the chances of all candidates who are contesting on the platform of the APC in Kogi State.

He commended the executive Governor of Kogi state, Alhaji Yahaya Adoza Bello, for his confidence in youths through his administration, noting that since inception of his government, the governor had always given the youths the opportunity to serve.

“Infact, no governor in Nigeria has engaged youths in governance like our governor and as such he is the Nigeria Youth Ambassador,” he concluded.

Hajia Allah-de who spoke on behalf of women described Governor Yahaya Bello as a gift to Kogi state , saying his leadership style and his concern for women and youth has no rivals.

She charged women to reciprocate the gesture back to the governor by giving overwhelming votes to all the candidates of APC in the forthcoming general elections.

“We should make Governor Bello proud by delivering all our votes to APC. We should not dissipate our energy on social media instead we should devote our time on door to door campaign to canvass for votes” she said.