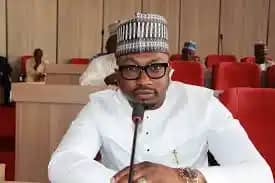 The Deputy Speaker , Kogi State House of Assembly, Rt Hon Ahmed Mohammed has called on Nigerians to support the presidential ambition of Governor Yahaya Bello of the State in order to remove the country from its present security and economic challenges.

Speaking during the 30th anniversary of the creation of Kogi State in Lokoja, the lawmaker who represent Ankpa 1 constituency at the State’s House of Assembly , said the governor in the last six years was able to transform the state through his laudable programmes especially in the areas of security and maintenance of peace in the state.

The Deputy Speaker who described Governor Yahaya Bello as a detribalized and vibrant leader, said the governor was able to unified all the ethnic groups in the state through his equitable , fair and transparency in sharing political positions and projects across the three senatorial districts, emphasizing that such effort has brought the desire unity and peace to the state.

He expressed optimism that Governor Bello if given the opportunity to lead the country , will take the nation to the promising land , saying he has gladly demonstrated that in Kogi State in the last six years.

The lawmaker while speaking on his achievements for his constituency, said in the last six he was able to sponsor many bills that have direct impact on the people of Ankpa 1 constituency.

“I sponsored many bills that has direct impact of the people, especially the Kogi youth development commission which was signed into law by the Governor of the State.

“I also sponsored a bill for people living with disability and several motions that affect the development and empowernment of my constituency and the state in general.

“In the area of provision of basic social amenities, I gave them portable water through sinking of bore holes to over sixty communities in Ankpa 1 state constituency.

“I have been able to intervene in the educational system of my constituency in terms of offering scholarship and construction and renovation of school structures , giving relief materials to students and also supporting them financially to enable them complete their schools and this gesture cut across primary, secondary schools and tertiary institutions” he stated.

On youth empowernment, the lawmaker disclosed that his empowernment programme which is second to non in the constituency was able to remove many youth from the streets , saying that effort has drastically reduced youth restiveness in Ankpa 1 constituency.

“I was able to introduced skill acquisition programme , where they learn various trades such as sowing , plumbing , vulcanizing, automobile mechanics and other artisan jobs that can give them livelihood. I started the programme when I noticed that most of the youth are jobless and have no sources of livelihood, but I am happy today that the youth are no longer idols.

“We are able to empowered women and the aged by providing them with support that will improve their lives” he said.

ALSO READ:  2023: Youths no longer have an excuse not to lead …says debate on party primaries, the electronic transmission must align with modern realities

The Rt. Honourable added that he was able to assisted youth and women with incentives to go into agriculture to improve in their livelihood while some youths who are interest in sport were supported and today many of them from the constituency that has passion for football have found their ways into national them .

“In the area of health we have retainer-ship with many hospitals in Ankpa where our people who are sick can easily access quality healthcare even if they don’t have money.

“We are able to renovate and furnish primary healthcare facilities in Ogajum and Ojopata in Ankpa 1 constituency aimed at bring healthcare to the door steps of our people through our intervention and we built homes for People Living with Disability aside the bill I moved for them in the house” he said.