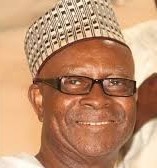 Life, they say is like riding a bicycle. To keep your balance, you must keep moving, this appears to be the guiding principle for Chief Patrick Adaba who has never for once looked back but constantly working towards making his environment a better place than he met it.

Pa Adaba, an elder statesman, had served in various capacities in his native Kogi state playing key roles in the development of the state and Nigeria in general, having served as a former deputy governor and former secretary to the state government.

Born on 14 Sept 1946 to the popular family of Pa Joseph Adaba. Pa Adaba, is someone who has brought panache, competence, pride and professionalism to bear across his career in both private and public service.

He went through public schools, from primary 1 to primary 7. After his secondary school, he gained admission into the prestigious Ahmadu Bello University (ABU), Zaria, where he graduated in 1971 with BA in History and Political Science and a combined graduate certificate of education. He is also an alumnus of the prestigious National Institute for Policy and Strategic Studies (NIPSS), Kuru.

His age is proportionate to the numerous outstanding achievements he has recorded at the state, regional and national level. This obviously lends credence to the trust and confidence reposed in him by his people who nominated him to represent their geo-political zone as a member of the Board of Trustees of the Peoples Democratic Party (PDP).

At 75, his life is indeed that of dedicated to the service and progress of his people and that of his beloved country. As an elder statesman, he has continued to be a moderating political force in Kogi State and Nigeria and bringing a uniquely fresh approach to leadership.

Just like Waziri Ibrahim, he continues to exhibit a strength of character that advocates “politics without bitterness”, believing that politics is a mechanism to re-design Nigeria and help people.

On the occasion of his birthday, he says that he has continued to “live the life God designed for him”. A life that has seen him emerge a seasoned administrator, from the University setting to the highest levels of government in Nigeria in elected and appointive capacities.

Pa Adaba public life has been shaped by the belief which he shared with a former United States President, that “The greatest leader is not necessarily the one who does the greatest things. He is the one that gets the people to do the greatest things.” This is what has thrown him up as a unique leader who connected with his people on several levels and his footprints firmly embedded in the sands of time.

At this stage of his life, we can only pray the Almighty God to continue to grant him good health, divine protection higher wisdom and the strength to continue to lead and ensure a better Kogi state and Nigeria for us all. Congratulations to a leader per excellent