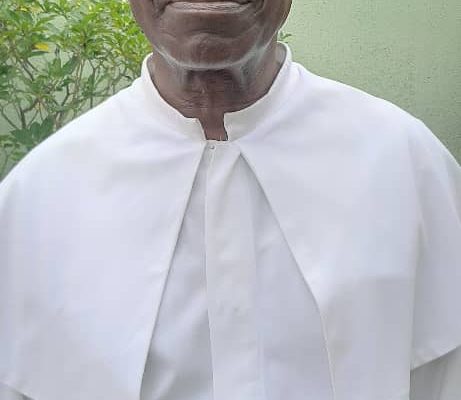 Professor Archbishop David Irefin is a disciple of Leader Olumba Olumba Obu and the international Chairman Christ Missionary Crusade Fellowship for the Brotherhood of Cross and Star. In this interview with selected Journalists, Professor Irefin a renowned Economist spoke extensively on how Nigeria and indeed the whole world can wriggle its selves out of the present precarious situations through the acceptance and practice of the teachings and practices of His Holiness Olumba Olumba Obu the key to Nigeria and world problems.
EXCERPT:

Most often, people appear to have certain perception about Olumba Olumba Obu and the church. As someone and institution so supernatural, what do you have to say?

If you go to the book of Daniel chapter 2 verse 44 God revealed to Nebuchadnezzar that at the end of time God will come to the world by Himself to set up a kingdom and this kingdom will break up all other kingdoms and remain forever and this kingdom is Brotherhood of the Cross and Star.

Everybody whether you a Christian, Muslim, Traditionalist, Buddhist even free thinkers are Brotherhood. This kingdom means love and everything created by God put together and Christ as the Head in the name of our lord Jesus Christ.

In the recent past, not much has been heard about the Brotherhood anymore. Is there any problem?

There is no problem. Leader Olumba Olumba Obu is the most widely spoken about. It is only in Nigeria that they are trying to cover up whatLeader Olumba Olumba Obu has come to do. Even different religious movement have been working against the Brotherhood of the Cross and Star, but in reality there is nothing more potent, most spoken of like the Brotherhood of Cross and Star.

Unfortunately, the media has not been enlightening people about the activities of Leader Olumba Olumba Obu and most especially the press has failed to inform the world about His works.That is why Leader Olumba Olumba Obu has sent us out to educate the press about His teachings and practices so that the press intron will start to enlighten and educate the human family. The press has a lot to tell the world about the manifestation of the Holy Spirit in this era.

In view of the ups and down in the political and economic life of the country, what do you think should be the role of the Brotherhood apart from prayer?

It is undeniable facts that all over the world people are stealing, fighting, quarrelling, deceiving, hating, killing, discriminating, kidnapping and other vices.

God knew before now that the world at this time will be filled with vengeance, hatred, division, racism, discrimination, insecurity, wars, wickedness and other vices and world religions and other organization would fail Man.

Rather than the existing scriptures solve human problems they become the sources of problems and hardship. After this woeful performance by the various religions, political systems and other human organizations, the Holy Spirit, the promised comforter by our Lord Jesus Christ has to step in to unite, discipline and redeem Man from damnation and destruction.

Leader Olumba Olumba Obu says, when we come together, everything will be bound into one, and there will be peace, love, mercy, wealth, knowledge, power and co-operation.

However, Leader Olumba Olumba Obu in the everlasting gospel maintains that the moment the Holy Spirit enters into a person he will automatically be transformed and changed to the standard expected of him by God.

Thus, all the evil practices and vices such as discrimination, killings, hating, fighting, wars and other vices which currently plague humanity shall be discarded. In the everlasting gospel, leader Olumba Olumba Obu emphasizes that only when Man separates himself from God that problems, hardship, suffering confusion and even death overtake him.

If you look at Nigeria critically and the entire world, you will see that the foundation of Nigeria was laid on sand. No love, hatred and cheating all over. The north for instance claimed they have the population and they must rule while the South -South claimed that they control the economy of the country and the Soth- West believe they have the knowledge to rule the country.

So the foundation of Nigeria right from the onset is fake and cannot bring anything good for the people and the country.

Imagine during elections some will say the Christians have the votes while others claimed the Muslims have the votes. How can you build a house that is so divided among its selves? That is why we are suffering in Nigeria and by extension the entire world.

However, the good news is that Leader Olumba Olumba Obu has come with the everlasting gospel, that contains His teachings and practices which is based on love for one another. This indicates that everybody is the same and no discrimination. Nothing like Hausa, Fulani, Yoruba or Igbo. We are just the same people so where there is segregation, discrimination and hatred as it is now in Nigeria God will never allow good things to happen there.

The falsehood of the foundation of Nigeria is the genesis of our suffering, otherwise we have enough human and natural resources to make all of us live a comfortable life in this country.

Why is the Brotherhood worship centres often sited far in the bush away from human habitation? Is there any significance?

It is not true because even in Lokoja here our bethel is directly opposite the federal university Lokoja Adankolo campus, can someone refers to that place as bush? Again in Lagos our locations can be found in Ikeja , Sululere  can such places be regarded as  bush? In Port-Harcourt it is situated at the GRA.

In Abuja if you go to Kubuwa , Pappe , Karu we have our bethels there. So Brotherhood of Cross and Star has nothing to do with bush it is just an imagination of the people who are ignorant about us. In London, Manchester, USA, Atlanta, Germany and other foreign countries Brotherhood is there inside cities. Brotherhood of the Cross and Star has a humble beginning to fulfilled what is written about that it will a\start like a mustard seed that will eventually dominate the world. Thus, a humble beginning should not be confused

What is your advice to Nigerians?

My advice to Nigerians, is that they should let go pride and arrogance and come in humility to His Holiness Olumba Olumba Obu, the King of kings and Lord of lord who has the key to peace, prosperity, and eternal life.

When Nigerians accept and key into the teachings and practices of Leader Olumba Olumba Obu as contained in the everlasting gospel, they shall be filled with love, peace, oneness, joy, mercy, tolerance, endurance, prosperity and rapid sustainable economic development.

However, any further delay by the political class, traditional rulers and religious leaders to recognize and surrender to His Holiness Olumba Olumba Obu who was ordained by God the Father to rule both heaven and earth would lead to more sufferings, hopelessness, confusion and death. This is because His Holiness Olumba Olubma Obu is the only one that has the blue print for the transformation and development of Nigeria and his teachings and practices as contained in the everlasting gospel as the only source to unite all the nationalities, ethnicities and religions in Nigeria.