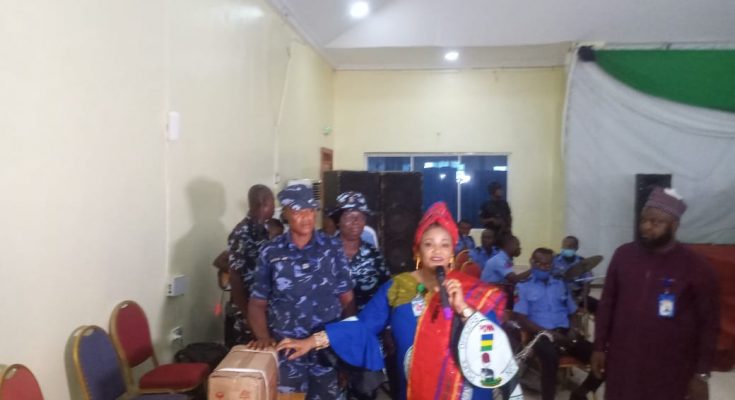 Over 100 wives of Police officers in Kogi have benefited from empowernment programme initiated by the wife of the Inspector General of Police Hajiya Hajara Usman Alkali Baba.

Addressing the wives of serving Police officers in Lokoja on Saturday, the wife of the Inspector General of Police said the welfare of Police officers and their relations remains a top most priority under the leadership of her husband in the Police Force.

She explained that, the Nigeria Police Force will always be at the forefront to strengthen the unity of the country adding that, the sacrifices of serving and retired Police officers will always be rewarded.

Hajia Baba however told the beneficiaries to make judicious use of the items given to them as it will go a long way at solving problems in their lives.

The wife of the Police boss who however, gave some tips for the beneficiaries to have a good home admonished them to be faithful to their husband, adding that, Police officers wives should be productive, active and not passive in the discharge of their duties.

According to her, submissiveness of wives to their husbands at homes would help to build a better nation as encapsulated in the two major religion practiced in Nigeria.

While admonishing them not to follow the negative trends in the society, the IGP wife stated that many women lost their homes due to impatience and disloyalty.

She averred that the creativity of a wife in her home has help to build a formidable relationship with her partner adding that, there is need for Police wives to always respect their husband, relatives and other people around them.

“A man wants somebody that will give him comfort, show him love and many more. A man want someone who will be there for him at all time irrespective of the circumstance. If a man lacks all this in the home, his mind will not be settled at work therefore it might bring about dissolution in the family”.

Earlier, the Wife of the Kogi State Governor Mrs Rashidat Bello lauded POWA for their unflinching support in nation building.

Mrs Bello said the present administration in Kogi State has continued to empower women just as she pledged to support the organization both morally and financially.

Some of the items distributed by the IGP’s wife includes sewing machines, gas cylinders, grinding machines, noodles, amongst others.

The maiden visit of the IGP’s wife to Kogi State alongside top wives of the rank and files of the Nigeria Police Force, also featured free medical outreach.