Home News We Can Not Move Students To Hostels Without Adequate Security….Says Vice-Chancellor FUL 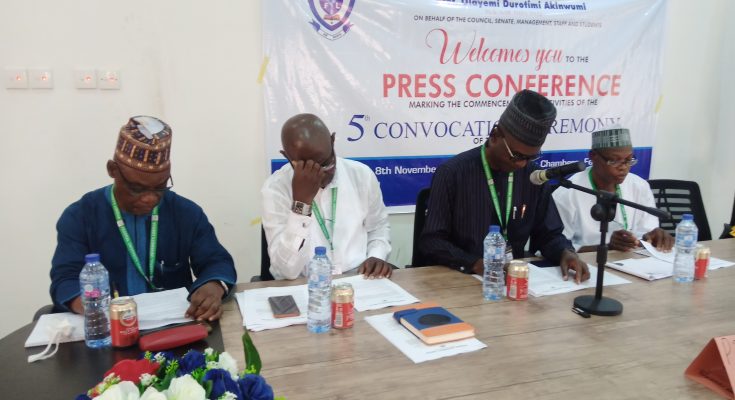 We Can Not Move Students To Hostels Without Adequate Security….Says Vice-Chancellor FUL

The Vice-Chancellor , Federal University Lokoja (FUL) Professor Olayemi Akinwumi has assured parents and guardians that the institution will not move the students to the permanent site until adequate security is guaranteed in the main campus of the university.

Akinwumi gave the assurance on Monday during a press briefing to mark the commencement of the fifth convocation ceremonies of the institution slated for Monday the 8th to Sunday November 14 , 2021.

According to him , the management of the institution has engaged the service of over 60 hunters to complement the efforts of the Police and Nigeria Security and Civil Defence Corps in providing adequate security of life and property to the students and staff of the institution at the Felele campus.

He added that the students will not be moved to the hostels until the management is satisfied with the security architect of the institution, saying the terrain of the campus calls for concern.

“The management of this institution will not toy with the security of students and staff of the university. We have seen what happened just recently in some tertiary institutions in the country where Professors and their children were kidnapped in the campuses.

“We have engaged over 60 hunters to and they have mapped out areas where criminals can use as escape route and we will blocked those areas. Until we are satisfied with the security here in the permanent site of the university, we will not move students to the hostels for now” he said

Speaking on the convocation, the Vice-Chancellor revealed that 804 graduands will be conferred with degrees and postgraduate diploma, noting that honorary degrees would also be conferred on eminent personalities that have contributed immensely to the development of Nigeria.

The Vice-Chancellor who stated that paucity of funds has been a major challenge of the university, noted that the institution which has attained its ten years since its establishment has witness tremendous and rapid growth in terms of academic programmes , infrastructural development, research and innovation.

“In our effort to achieve the much needed physical development and programme expansion , the university commenced academic activities at its permanent site (Felele campus) in September 2021 even in the face of challenges and we are calling for the assistance of the federal, the state government and other spirited individuals and organizations” the VC said.