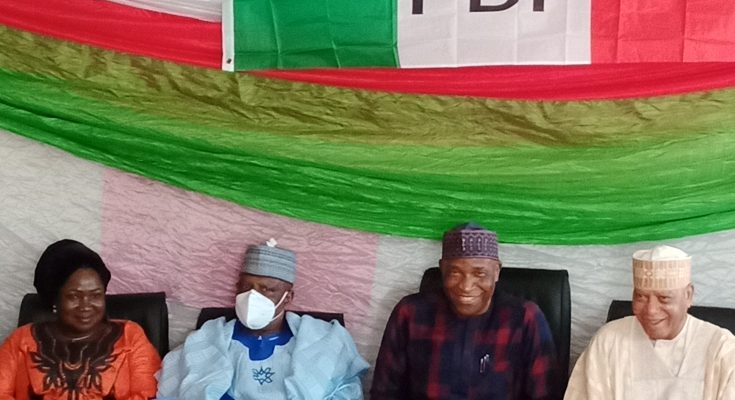 The delegation of North Central for President 2023 has charged political leaders and stakeholders from other zones in the country to support the North Central to produce the next president of Nigeria in the spirit of fairness, equity and justice.

The leader of the delegation who is a former Governor of Kwara State and a Senator from Kwara North, Alhaji Mohammed Shaba Lafiagi gave the charge on Thusday when the delegation pay a visit to members of the People Democratic Party (PDP) at the state secretariat of the party in Lokoja.

According to him , since the independent of the country over sixty years ago the north central that had contributed emensely to economic and political development of the country has never produce either the Vice President or President to lead the nation.

“Many times I do ask my self questions wether the North Central does not have eminent personalities that can be chosen to lead the country at the apex political position.

“But by virtue of history, since the independent of this country elites from the North Central have held sensitive positions that pave room for the stability and peaceful coexistence of Nigerians.

“Therefore we are advocating that our party the PDP should allow the North Central to produce the next presidential candidate of the party ahead of 2023 general election” he appealed.

In his remark , the former National Chairman of PDP Abubakar Kawu Baraje told members of the party that the agitation for the North Central to produce the next president can only be achieve only when the people of the zone speaks with one voice and pursue the agitation without any forms of sentiment.

“The North Central Zone has suffered imbalance in sharing of political positions in the country. The Zone that has been producing the nectars that nourish the country has been relegated to the background during presidential elections and we said enough is enough.

“We have in the person of Senator Abubakar Bukola Saraki a detribalize , energetic and committed leader with experience in leadership that can pilot the affairs of the nation if given the opportunity to do so and we are appealing to the people of North Central to support him when he eventually declare to contest the presidential election” he said .

The Kogi State Chairman of PDP, Engr. Sam Ohuotu , said the mission of the delegation is to canvas for a candidate of North Central to emerge as president, stressing that the time has come for the zone to produce the next president.