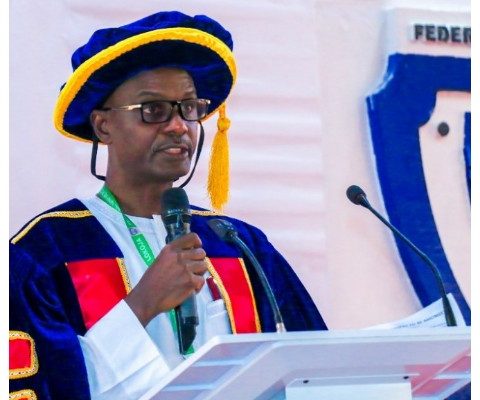 The Vice Chancellor , Federal University Lokoja (FUL) Professor Professor Olayemi Akinwumi has vowed not to allow detractors derailed him from achieving his vision and mission for the development of the institution.

Speaking during a press conference to mark one year in office of the Vice Chancellor held at the main campus Felele, Lokoja , Professor Akinwumi , said exactly one year ago he pledged his determination to make the university the first of its kind among the Universities in the Country, saying he will never succumb to any internal or external detractions that can hindered him from achieving his plans.

“The recent ranking of the institution as first among the nine universities established by former President Goodluck Jonathan has brought confidence that the university has started achieving academic excellence” he stated.

He noted that the feat was achieved through the effort and commitment of staff and students of the university and promised to sustained the effort.

The Vice Chancellor disclosed that he met the Academic Staff Union of universities Federal University Lokoja branch divided among its members, revealing that through his concerted effort he was able to reconciled the wary factional groups in the university, saying the institution today enjoy peaceful atmosphere.

He further mentioned that within one year in office he was able to established medical college in the university with the resource verification carried out by the National University Commission, assuring that the medical programme will commence this year.

He added that re-accreditation of 29 programmes of the university have been achieved.

“When I took over the leadership of this institution, about 39 academic programmes were introduced without resource verification and students were given admission and the records was not with Joint Admission and Matriculation Board (JAMB).

“Those given admission especially accounting department find it difficult to proceed on the National Youth Service Corps (NYSC), though we have approached JAMB for a solution in that line and I am optimistic the the graduants will be mobilize for national service.

“We have also facilitated road construction at the permanent site in Felele to ensure that the staff and students of the institution have access to their place of work and lecture halls” he stated.

Speaking further the Vice Chancellor, said a lot have been done by his administration in ensuring that the welfare of both academic and non academic staff are on priority list , saying the staff have started enjoying welfare packages that in the past eluded them.