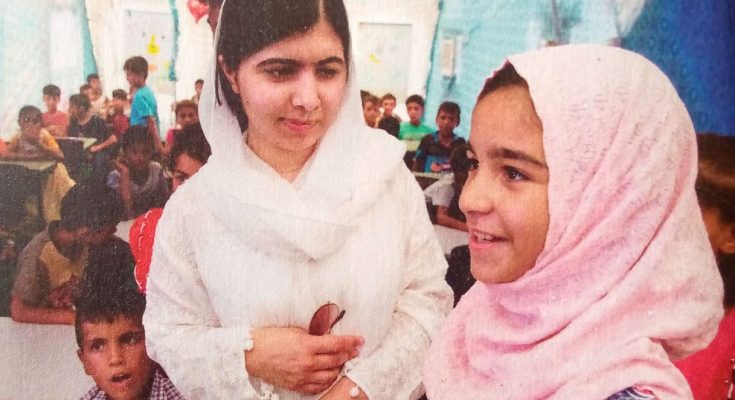 Today we reveal that in a global vote, millions of children have chosen Malala Yousafzai Malik as their World’s Children’s Prize Decade Child Rights Hero for her fight for the right of all girls to an education and freedom. Nigerian children participated in the Global Vote.

When she was just 15, Malala was shot in the head by the Taliban, who wanted to silence her. But instead, her campaign for equal rights for girls became even stronger. The Malala Fund now supports local activists in Pakistan, Syria, Nigeria and other parts of the world where girls are severely affected by injustices and violations of their rights.

“I was honoured to receive the World’s Children’s Prize in 2014, and then today to have this title as Decade Child Rights Hero added is a huge honour. I hope that it will give me more motivation to continue my activism for girls’ education. I have this mission to see all girls receiving safe, quality and free education. Right now all over the world there are 127 million girls who don’t have access to school. These girls have dreams, just like us,” said Malala.

The presentation of the Decade Child Rights Hero award at Gripsholm Castle in Mariefred, Sweden, has been delayed for two years due to the many school closures around the world during the pandemic. The ceremony was led by children from 12 countries, all of whom have experienced violations of their rights, including trafficking, child marriage and the commercial sexual exploitation of children. They were assisted during the ceremony by Sweden’s Queen Silvia.
It is the second time children around the world have chosen a WCP Decade Child Rights Hero from among all those recognised in the World’s Children’s Prize over the past decade. Last time, in 2010, the children chose Nelson Mandela and Graça Machel as Decade Child Rights Heroes.

200-year fight for children
Malala was one of eight candidates nominated in the global vote for the Decade Child Rights Hero. All eight are previous recipients of the World’s Children’s Prize, often referred to as the ‘children’s Nobel Prize’ by media around the world.

The candidates have been fighting for the rights of vulnerable children for a combined total of over 200 years. They give hope and a better life to child soldiers, trafficked children, children who experience discrimination because they are differently abled, girls who are survivors of the commercial sexual exploitation of children, forced into child marriage or to quit school.

Empowered 46 million children to defend democracy and rights
Despite the pandemic, almost two million children around the world were able to take part in the World’s Children’s Prize Program, and choose their Decade Child Rights Hero.

Having learned through a global teaching aid about their rights and the work of the Child Rights Heroes for vulnerable children, the participating children organized their own democratic election days at their schools, with everything from voting booths to election officiators. The WCP Program is one of the world’s biggest annual education initiatives, empowering children in human rights, democracy and sustainable development. Some 46 million children have participated since the year 2000.

They include: Child soldier rescuer Murhabazi Namegabe, DR Congo; rescuer of trafficked children James Kofi Annan, Ghana; Rachel Lloyd, USA, who campaigns against the commercial sexual exploitation of children; Ashok Dyalchand, India, who fights for schooling for girls and against child marriage; Phymean Noun, Cambodia, who gives children access to education; and the two posthumous recipients, both of whom fought for the rights of children discriminated against because they are differently abled, Anna Mollel for Maasai children in Tanzania and Manuel Rodrigues mainly for blind children in Guinea Bissau.
Broad support
Almost 75,000 Global Friend schools in 120 different countries support the World’s Children’s Prize, as do education ministries and school authorities in many countries.