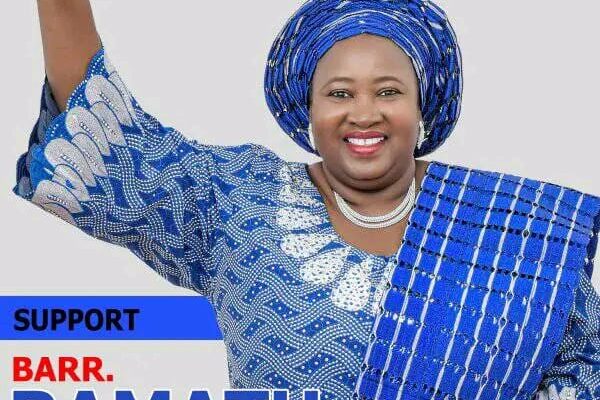 Hajia Ramatu Shehu Atta made this known during her Sallah felicitation visits to her ardent supporters who trooped out in large numbers at Ihima Shopping Complex Okehi while overseeing the continous distribution of clothes and rice to her constituents.

This was contained in a press statement she personally signed and made available to newsmen in Lokoja.

The Chieftain of APC said that, “The combination of these two men with the background and solid exposure in both executive and legislative processes will put the legislature and the Presidency in a robust relationship for an excellent collaboration and performance”

She further stated that, one must commend the courageous decision of Asiwaju Bola Ahmed Tinubu for exhibiting his leadership traits once again at a time the party seemed to be at crossroads.

Ramatu Shehu Atta called on all party faithfuls to use this new development to inject positive energies to make sure that the door to door mobilization gets to all nook and cranny of the nation.

She pledged to put her political structure and the connections of her supporters to ensure that victory is attained at the polls for the party.

It will be recalled that Barr. Ramatu Shehu Atta contested for the Senatorial Primaries of APC for Kogi Central Seat, but not satisfied with the outcome she petition the Party Appeal Committe which refused to entertain her appeal.

She then filed a petition at Lokoja High Court. The party leadership at the State level previalled on her to withdraw the case and work for the interest of the party.

While responding to the largesse shared, one of the women leaders from Okehi LGA reinstated their commitment to the political movement of RSA pointing out that her sustained efforts of always supporting them individually and their groups for over ten years now cannot be washed away.

She assured that they would not leave any stone unturned to get to every woman and youth in Kogi Central.