Home News CSO Empowered over 350 women in Kogi, caution them against vote selling 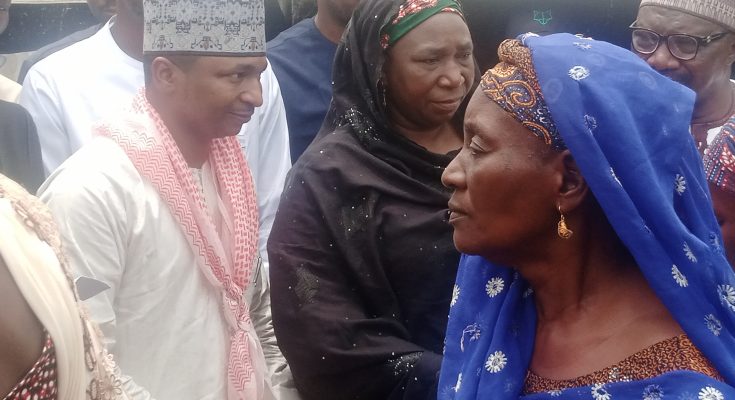 CSO Empowered over 350 women in Kogi, caution them against vote selling

As part of effort to improve the livelihoods of the people at the grassroot an international election monitor, Ambassador Hamzat Lawal has empowered over 350 women with cash to boost their petty trading.

The empowernment programme which was part of the sensitization advocacy to the grassroots against vote buying and selling during election was organized by a Civil Society Organization , Connected Development held at Upogoro/Odenku ward in Okene local government area of Kogi state.

Addressing the beneficiaries, women groups and youth during the sensitization, Ambassador Lawal, said the empowernment is a token to appreciate women for their support when he declared to vie for the ticket of House of Representative under the platform of the All Progressive Congress.

According to him, he was in Upogoro/Odenku ward to kick start a door to door, house to house and ward to ward sensitization advocacy for the collection of Permanent Voter’s Card (PVC) and also to educate the electorate ahead of 2023 general election on the need for them to do away with vote buying and selling associated with election in the country.

He described vote buying and selling as a great threat to the political development of Nigeria and urged voters , especially women to resist any attempt by money bags politicians to deceive them with rice, cloth, maggi and money at the detriment of their future.

“As a mobilizer working with grassroots , my simple message is that if politicians that are corrupt come to you to induce you with petty items, you should reject their offers.

“During do not collect money rather vote on issues, listen to them and ask them salient questions about their ideas and what are their plans. You should vote for people you can hold to account for their stewardship and people that can deliver dividend of democracy to you in order to improve your well being.

“Democracy is about development and welfarism of the citizens but a situation you decided to sell your vote to wrong candidates you continue to dwell in abject poverty while the politicians swim with his family in opulence and comfort” he advised.

In her remarks , Bilkisu Ahmed a primary school teacher and community leader commended the organization for the pre-campaign sensitization and assured that women in the ward would heed to the advise of no selling of votes.

“If we sell our votes during election , the politicians that buy the votes will have to recoup their money and at the end of the tenure he or she will not be able to deliver to us the dividend of democracy.

“I am also using this medium to advise our youth that are used to cause electoral violence to have a rethink because the politicians that use them their children are in abroad schooling” she said.

Comrade Usman Abdulsalam an indigene of Upogoro , said he was impressed by the sensitization carried out by Ambassador Hamzat Lawal ahead of 2023 general election.

He pointed out that the meeting has opened many people eyes to the negative effect of selling votes to politicians that have nothing to offer in return, assuring that henceforth their votes will be based on capacity and antecedent of candidates.