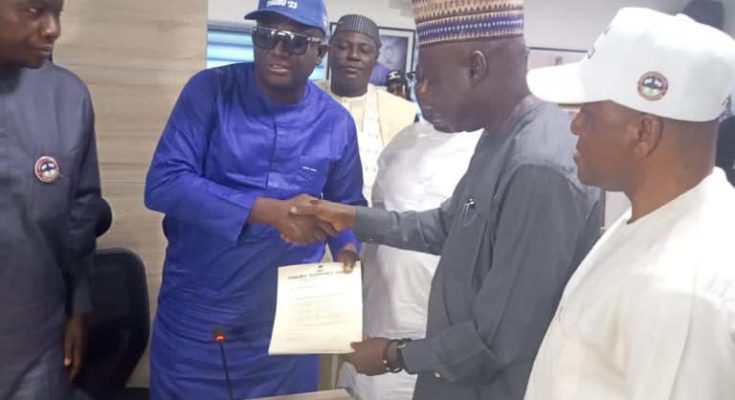 APC campaign council tasks supporters on victory at the polls

The Director General, All Progressive Congress, (APC), campaign council, Governor Simon Lalong, has charged supporters of Tinubu/ Shettima to intensify effort in ensuring that the presidential candidate of the party wins the 2023 general election.

He also charged the group to make their campaign issue based particularly from the polling units.

The DG stated this on Tuesday when Tinubu support group powered by Team Gamji, led by Alhaji Abubakar Kent and all executive members paid him a visit at the campaign council office in Abuja and to also present congratulatory letter to Hon. Abiodun Faleke, member House of Representatives over his appointment as the secretary of the campaign council.

The DG who was represented by Yakubu Datti, , his Chief of staff urged the supporters to work towards an overwhelming victory for Asiwaju/Shettima, assuring that the winning bring succour to all members.

While expressing confidence in the group the DG said from the calibre of people present in the group and are using their resources to support the course, victory is assured.

“Our campaign will be issue based. We are going to campaign on strength , character and personalities of our candidates, based on their previous track record of achievement.

“You must campaign in all our polling units. We are going to de-emphasized campaigns at the national level. We must all go back and ensure that we win in all the units” he emphasized.

Alhaji Abubakar Kent, Chairman TSG Powered by Team Gamji while presenting a congratulatory letter to the Secretary of the Presidential campaign council on Tinubu/Shettima 2023 assured that the group will work assiduously towards the victory of the project.

Speaking also, Dr Moses Atakpa former head of service Kogi state, who led the representatives from kogi state, said that they are solidly behind Gamji who he said was working round the clock to ensure victory for Asiwaju.

Atakpa commended James Faleke’s sincerity of purpose, dedication and commitment to the success of the project.

In a goodwill message, Alhaji Abu Imam also assured that the group which is a movement of people working for the victory of Asiwaju/Shettima presidency will leave bo stone unturned until victory is achieved.

TSG powered by Team Gamji has members drawn from all the north central states of Kwara, Fct and Kogi Niger, Plateau, Nassarawa state.