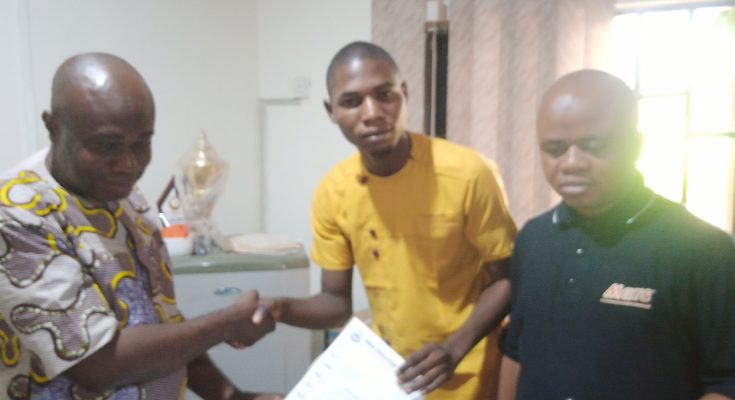 As part of effort to encouraged youth in the pursuit of western education, the Board of Trustees, Ebira Education Trust Fund on Thursday awarded a scholarship to an indigent student to read Medicine and Surgery (MBBS) at the Federal University Lokoja, Kogi State.

The Chairman, Board of Trustees of the Trust Fund Professor Mohammed Salihu Audu who presented the scholarship to the beneficiary Isaac Alaba David at NUJ press centre in Lokoja, Kogi State, disclosed that the scholarship award which is four hundred thousand naira (#400,000) is to enable the awardee kick start his course of study.

He said , the presentation of the award was an outcome of ‘Save my Soul’ message received from an individual who was offered admission to study Medicine and Surgery but could not take up the offer due to financial constraint, necessitated by the pathetic conditions of his parents.

Professor Audu a former Vice Chancellor of the Federal University of Technology (FUT) Minna, Niger state, stated that the board of trustees through its selection committee headed by Professor Angela Okatahi investigated the matter thoroughly which led to the offer of the award to Isaac Alaba David the recipient.

Speaking on the trust fund, Prof. Audu said Ebira Youth Congress (EYC) conceptualized and launched Ebira Education Trust Fund for Kogi Central youths as a potent avenue by which frontiers of knowledge could be further widened.

According to him “The underlying rationale and beauty of the scheme is actually intended to speak to a bourgeoning crop of quality intellectuals of diverse disciplines to emerge from among our youths in the next few years courtesy of the Trust Fund.

“The core mandate of the Trust Fund does not qualify the youths to run it by themselves, which is why the BoT was carefully constituted by the same youths from across the five Local Government Councils of Kogi Central Senatorial District at an enlarged EYC Congress held at Okene” he said.

While commending the financial contribution of well meaning Anebira toward the project Prof. Audu revealed that the Board had awarded scholarships to four deserving postgraduate students from Kogi state central senatorial district to pursue their various course of studies.

In his remark, Prof. Muhammed Suleiman Audu , the Deputy Vice Chancellor Federal University Lokoja, Kogi state, said that the Ebira Education Trust fund have taking it upon itself to render assistance to students who have interest to further their education, but lack the financial strength to achieve such dream.

The President General, Ebira Youth Congress (EYC) Ateiza Obiyo Aliyu in his vote of thanks expressed appreciation to members of the Board of Trustees for rekindling hope in the mind of the less privilege who are very eager and ready to acquire higher education.

He thanks the BoT for considering the plea of the awardee who seek the intervention of the Trust Fund to achieve his dream of becoming a medical doctor.

In his words of appreciation, Isaac Alaba David who was visibly joyous , simply said “I lack the words with which I can express my appreciation to the BoT , members of Ebira Education Trust Fund and Ebira Youth Congress (EYC) , but I will continue to remind myself that I am deeply indebted to this Trust Fund and the entire Ebira ethnic group”