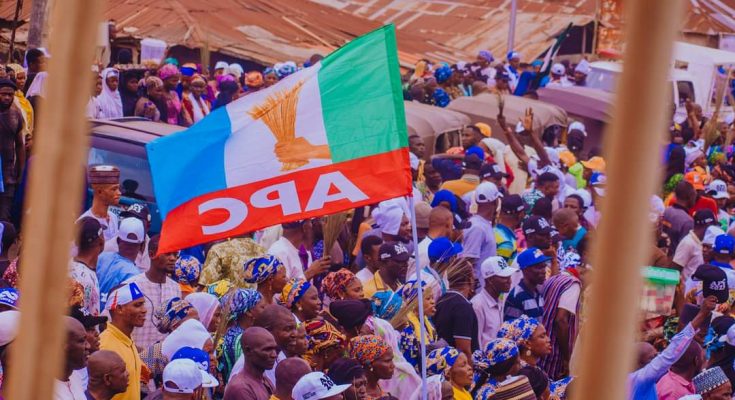 Ahead of 2023 general elections, thousands of members and supporters of the All Progressives Congress in Okehi LGA of Kogi State trooped out on the streets of Ihima for a solidarity walk for all APC candidates, from Presidential to state house of assembly.

The supporters, who were chanting various solidarity songs, kick started the walk from Obangede junction and ended it at Ikuehi, where party members and their huge crowd of supporters pledged their unalloyed support for the APC government at the centre and for Governor Yahaya Bello of Kogi State.

According to many of the supporters , since the creation of the state 31 years ago, no Governor had impacted so positively on critical sectors like Governor Bello.

They said the Governor’s landmark achievements were scattered all over the state for Nigerians to see, noting that the absolute peace and total security of life and property enjoy by citizens in the state calls for commendation and support for the Governor.

At Ikuehi, the Commissioner for Local Government and Chieftaincy Affairs, Barrister Ozigi Salami Deedat, addressed the crowd, commending them for showing love to the party and assuring them of sustaining the developmental achievements recorded by Governor Yahaya Bello-led administration in Kogi State.

He called on the people of Ihima to vote for all the party’s candidates, from president to state house of assembly, noting that the tumultuous crowd had shown that the people were truly happy with the achievements of the government.

In his speech, the Okehi Local Government Chairman, Abdulrahim Ohiare, who was presented at the rally , assured that more dividends of democracy await the people of the Kogi central senatorial district and indeed the entire state.

He therefore urged them to come out enmass on election day and cast their votes for APC candidates in all elective positions, adding that the coming of the Tinubu-Shettima presidency would usher in nothing but abundant prosperity.

The House of Assembly member representing Okehi State Constituency, Hon Muktar Bajeh, also commended the supporters for their show of love and support.

The highlight of the walk was the presentation of Hon. Sadiq Abubakar Ohere for Senate; Hon. Idris Ozi Shaibu for House of Representatives (Adavi/Okehi constituency) and Hassan Otokiti, House of Assembly, Okehi State Constituency.