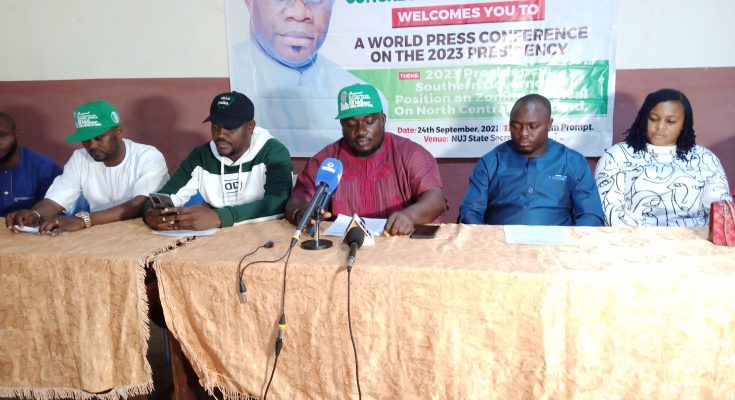 A Northern Group under the aegis of Congress for Better Nigeria has appealed to Nigerian leaders to zone the position of president of the country to North-Central region comes 2023 in the interest of justice and fairness to the people of the region.

The Convener of Congress For Better Nigeria, Zacchaeus Dare Micheal who made the appeal during a press conference held in Lokoja berated the Southern governors over their insistence on power returning to the southern zone in 2023.

He described the demand of the Southern governors as illogical, saying such agitation does not conform to the principle of equity, fairness and justice upon which the nation is built.

According to the group, the press conference was necessitated to correct the statement credited to the southern governors that power must return to zone in 2023.

The Convener of the press conference stated that, for Nigeria to survive as a united and indivisible entity with its diversity, the principle of equity, fairness and justice must be jealously guided to avoid unnecessary acrimony and friction within the polity.

He said based on this democratic principle the call by the group for other zones to concede the Presidency to the Middle belt which had not tasted democratically elected power since independence in 1999, said it has become imperative to avoid over heating the political.

While tracing the history of Presidency of country since May 1999, the youth leader said the South-West emerged with Olusegun Obasanjo who served for two tenures of eight years, noting that the South-South have produced Goodluck Ebele Jonathan who spent 6 years in power.

He pointed out that based on this democratic principle the call by the group for other zones to concede the Presidency to the Middle belt which had not tasted democratically elected power since independence in 1999 has become imperative to avoid over heating the country’s political space.

ALSO READ:  PATRICIDE : Right Activist Charge Parents to Prioritize the Up bring of their Children

The Congress equally identified Governor Yahaya Bello as the most preferred and qualified candidate from the North Central Zone that has all it takes to lead Nigeria to the promise land.