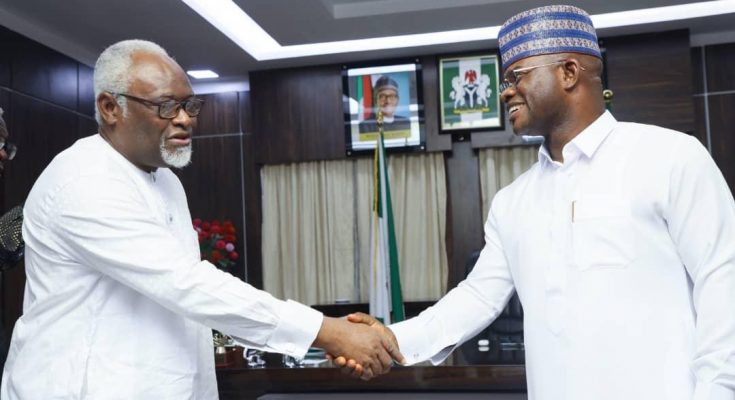 Kogi State Governor Yahaya Bello has charged media practitioners in Nigeria to be proactive in taking back their profession from the hands of quacks and the hackers who are hellbent in tarnishing the good image of the noble profession.

Governor Bello gave the charge on Friday evening during a Dinner put in place in honour of the 29th edition of the Nigeria Media Merit Award(NMMA) held in government house Lokoja, the Kogi state capital.

According to him, myriad of unregulated persons armed with Internet-enabled devices had in recent time haunted the media space, especially on social media with unverifiable news and information capable of causing havoc in the society.

“On the flip side, lives and whole societies have been ruined by the irresponsible practice of journalism by media practitioners, or quacks who impersonate them.

“The use of the tools of the journalist’s trade to deal in hate speech has set off many a fire which ultimately consumed whole politics and their people. Fake news is ubiquitous nowadays, whether it is rumour-mongering, dangerous innuendo, character assassination or other forms of inaccurate reportage.

“The problem is so endemic that in 2020 alone, statistics show there were 1.8 billion engagements with fake news on Facebook alone! Nigeria, like many countries, has fallen victim to it many times, sometimes with devastating loss of lives or properties” he said.

The Governor who described media as inescapable hallmarks of modern society and the custodian of public perception, said the practitioners must work and function within the ambits of the law to avoid malfunction.

“Practitioners must recognize that due to the incredible powers which society has entrusted to them, there is a corresponding demand for responsibility, ethics and professionalism in the exercise of those powers by journalists” he advised.

He described the existence of Nigerian Media Merit Awards (NMMA) as a veritable tool through which sanity in the industry can be promoted to ensure the real journalists are motivated to do their work professionally.

He however assured that his administration would continue to support the media to achieve its goal as the fourth estate of the realm.

Rev. Dr. Paul Frank who spoke on building religious tolerance in the state, commended Governor Yahaya Bello for providing level playing ground for all religions to strive in the state.

According to him” The Kogi State Religious Council is proud of Governor Yahaya Bello for his spiritual and financial support to all religious bodies in the state. The Governor’s spirit to build a befitting Chapel in Government House, is a resounding testimony even though he is a devoted Muslim.