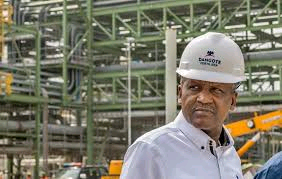 The 650,000bpd Dangote Petroleum Refinery, Nigerian National Petroleum Corporation (NNPC) as well as other modular refineries are expected to be the major drivers of Nigeria’s demand for petroleum products, which is projected to grow massively in the nearest future.

Speaking at the 15th Oil Trading and Logistics (OTL) Africa Downstream Week in Lagos, the Group Managing Director of NNPC, Mallam Mele Kyari, said NNPC Refineries’ 445,000 barrels-per-day (BPD), Dangote Refinery’s 650,000 BPD and the 250,000 BSD expected to come from the Condensate Refineries through the private sector partnership respectively would supply the requirement of Premium Motor Spirit (PMS) needs in Nigeria.
Kyari’s position only corroborated that of President of the Dangote Group, Aliko Dangote who said he was dissatisfied with the fact that Nigeria is a leading oil producer but imports all her petroleum needs.

Dangote who was speaking on his mega refinery project in Lagos said it was the unsavoury situation the nation found itself that made him to take up the challenge to embark on the construction of the gigantic refinery project, which he said is one of the biggest in the world.

According to him some 29,000 Nigerians would be employed in the refinery when completed and that would also help in the employment generation drive of the federal government.

Kyari, who was represented by the Group Executive Director, Downstream, NNPC, Adeyemi Adetunji, explained that the diversification of NNPC’s portfolio through acquisition of 20 per cent equity valued at $2.6 billion in the 650,000 bpd Dangote Refinery located in the Lekki Free Trade Zone would ensure national energy security and guarantee market for Nigeria’s 300,000 bpd.

He stated, “NNPC is adding 215,000 BPD of refining capacity through private sector driven co-location at the existing facilities in Warri Refining and Petrochemical Company (WRPC) and Port Harcourt Refining Company (PHRC) respectively. Modular refineries are also adding capacities such as the 5,000 BPD Waltersmith refinery, which will be upgraded to 50,000 BPD.

“Additional 250,000 BPD is expected to come from the Condensate Refineries through the private sector partnership. The co-location and Condensate refineries will close the PMS supply-demand gap and create positive returns to the investors,” the NNPC helmsman added.

He said the Corporation has progressed with the Refineries Rehabilitation Programme to boost its participation in the oil & gas value chain by awarding the $1.5 billion Port Harcourt rehabilitation contract with the commitment to deliver on Warri and Kaduna Refineries.

On gas commercialisation effort, Kyari said the Federal Government has declared 2021-2030 as the decade of gas development in Nigeria.
Kyari said the demand for natural gas could grow about four times over the next decade, increasing from 4.8 billion cubic feet per day (bcf/d) in 2020 to between 10 – 23 bcf/d in 2030.

He said currently, supply to the domestic market was about 8bcf/d to power, 0.77 bcf/d to industries, and about 54 bcf/d was flared, while 3.2 bcf/d was for export gas through the LNG and the West Africa Gas Pipeline (WAGP).

According to him, achieving this growth in demand would be occasioned by increasing the dispatchable capacity of existing power, in line with the Presidential Power Initiative, which is less than 1.4 bcf/d).

He added that the growth would be achieved through assuring delivery of major fertiliser projects (Dangote, Brass) 5 bcf/d), and enabling industrial demand for natural gas in the northern axis of the country (1.2 bcf/d).

On the global oil market outlook, Kyari said, “Some $10.4 trillion global stimulus in response to the COVID-19 pandemic has led to the rebound in consumers’ spending while incentives for long-term investments in hydro-carbon have waned.”

He stated that hydrocarbon would continue to be relevant in the global energy mix for the next two decades, quoting the recent data by the Organisation of Petroleum Exporting Countries (OPEC).

On the issue of downstream in transition, the NNPC boss noted that the Nigerian oil and gas industry has been in transition prior to the passage of the Petroleum Industry Bill (PIB), in response to the global energy transition and decarbonisation initiatives.
Kyari maintained that it would be difficult to discuss the transition in the downstream sub-sector in isolation from the overall evolution that was happening in the industry.

He said NNPC had diversified its portfolio over the years, transiting to an energy company with new investments in gas, power, and renewables, pointing out that key pipeline projects are ongoing to assure delivery of gas to the demand nodes.

He stated, “The OB3 project, which brings gas from East to West, is nearing completion. The 614km Ajaokuta, Kaduna, Kano (AKK) project, which was launched by Mr. President in June 2020, is progressing very well. These could add up to $40 billion to annual GDP and create additional six million jobs.

“The corporation has progressed with the Refineries Rehabilitation Programme to further boost its participation in the Oil and Gas value chain by awarding the $1.5 billion Port Harcourt rehabilitation contract with the commitment to deliver on Warri and Kaduna Refineries.

“The rehabilitation of critical downstream infrastructure comprising of major pipelines, depots and terminals through the Build, Operate and Transfer (BOT) financing model is on course,” he added.

Kyari explained that the transition in Nigeria’s oil and gas sector was being driven by the global decarbonisation efforts to switch to renewables in response to environmental concerns.