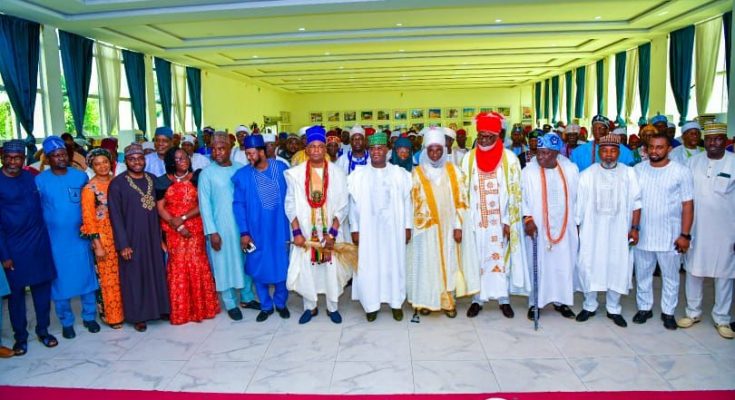 Kogi gov. cautions traditional rulers over hosting hostile intruders …urges them to work for peace, and unity during electioneering season

The Kogi state governor, Yahaya Bello has cautioned traditional rulers in the state over issues of hosting hostile intruders within their domain warning that such action going forward would meet stiff opposition and resistance from his administration.

The governor made this known on Tuesday while hosting First and Second Class traditional rulers from across the 21 Local Governments of the state to discuss issues bothering security, particularly as the electioneering season was drawing close.

He said “We are approaching the season of elections; you all are connected within and outside the state and have sons and daughters who are interested in contesting for elections on the platforms of various political parties. We need peace, security, tranquillity and cooperation in this season”.

The governor expressed that it was his responsibility to ensure that lives and livelihood are secured and protected, reiterating that the state under the current dispensation has made gains in security and safety as against past governments, hence any exhibition of alien traits by any person would face measurable response from the government.

He stated that within the provisions of the law, he would not condone any act of criminality, violence and brigandage, in the upcoming political dispensation while urging them to caution sons and daughters of their community cutting across political parties as the government would not listen to anyone when dealing with those caught initiating or sponsoring violence.

Governor Bello noted that outside his administration’s plan to improve infrastructure, unity, cooperation and inclusivity were remarkable footprints he wanted his administration to be remembered for while he urged every traditional stakeholder to cooperate with his government in achieving such a goal.

The governor called on traditional rulers who were not residents within their locality to relocate home to their people, adding that they cannot be effective rulers from outside their domain as such was against the rules of the assignment they have been entrusted with

While the governor described the traditional rulers in the state as partners in progress in the several achievements made in security, peace and cohesion he admonished them to continue to play their rightful role that would allow the state to remain a model for other states in the country.

The Deputy Governor in his vote of thanks, Kogi State Deputy Governor, Edward Onoja appreciated the Ministry of Local Government and Chieftaincy Affairs for ensuring that the Chieftaincy sector of the state was not only solid but progressively improving.

He appreciated the Traditional rulers for praying for the state, the government and the governor urging them not to relent from this role so that the state would continue to experience peace while he thanked the governor for putting Kogi state first ahead of any primordial sentiments which he noted has further fostered peace

Speaking earlier at the occasion the Attah of Igala Kingdom and President, Kogi State Traditional Council, HRM Matthew Opaluwa appreciated the state government over what he described as efficient security architecture while he opined that traditional institutions and political parties must synergise to facilitate a peaceful electioneering season.