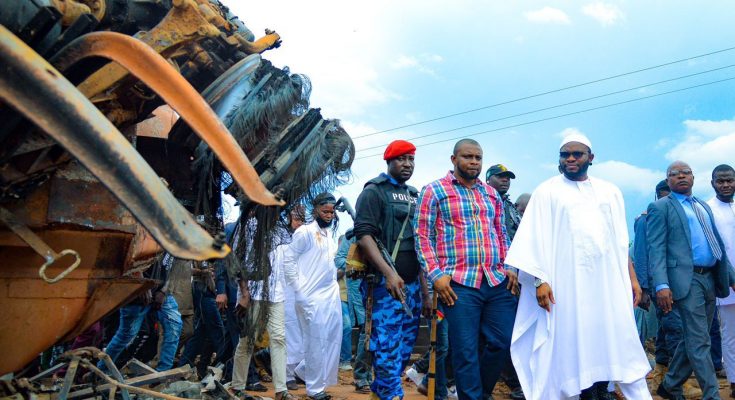 Kogi State Governor, Yahaya Bello on Friday visited Ankpa Local Government Area, for an on the spot assessment of the unfortunate accident caused by a petrol tanker on Wednesday.

The state governor who was represented by his Chief of Staff, Pharm. Abdulkareem Mohammad Jamiu alongside a high powered delegation expressed sadness over the loss of live of individuals who were going about their businesses before their sudden and untimely death.

He noted that although death was an inevitable experience, no individual or family member would pray for themselves or their loved ones to exit in such a tragic manner, hence the state government deeply shared in the grief of family, friends and associates of the deceased.

Governor Bello stated that Traditional rulers alongside the Chief Security Officer of the Local Government have been admonished to orientate commuters and other road users on safety and precautionary measures.

He stressed that the lives and safety of the citizens of the state were of great concern to his government adding that in a bid to forestall future occurrence on that particular axis, the ministry of works would be directed to undertake precautionary and safety measure.

When asked about the proximity of market to the accident spot, governor Bello explained that in order to avert such re occurrence activities of selling by the road side or heavy traffic area which was not only peculiar to Kogi state must be looked into asserting that despite the belief by sellers that such avenue give easy access to market, the risk were undeniably enormous.

He said Local Governments authorities must constitute task force that would check road side selling and inappropriate road use, particularly by articulated vehicles while assuring that government would take up the medical and welfare bills of those who were currently hospitalised.

The Chairman of Ankpa Local Government, Hon. Abagwu Ibrahim confirmed that 29 persons were killed in the unfortunate incident while 2 were currently receiving treatment in the hospital.

He said before the incidence the Local Government had made efforts to implement laws which restricted movements of big vehicles from some specific areas, he however promised that stiffer measures would be taken against flaunting of this directive going forward.

Previous PostFROM THIRD WORLD TO FIFTH: AT 62, NIGERIA AS A BAD EXAMPLE Next Post2023: Nigeria Ready for Female President