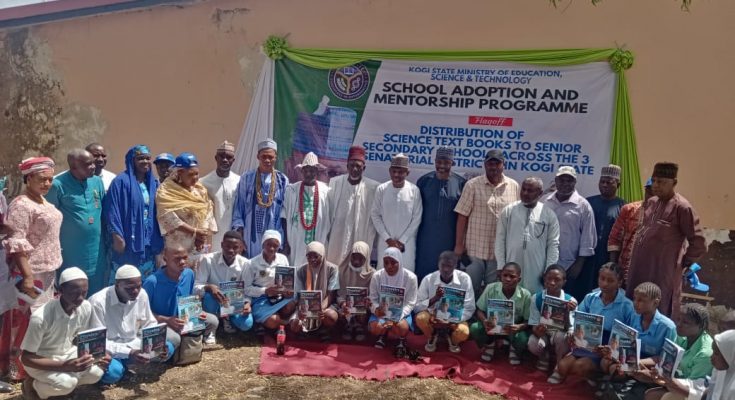 Kogi State Government has called on well meaning indigene of the state to support the development of education in order to complement government’s effort in making the state the hub of science education in Nigeria.

The Commissioner for Education, Science and Technology Mr Wemi Jones made the call on Friday during the flagging off ceremony of distribution of 11,000 physics and chemistry textbooks to senior secondary schools in Kogi state under the Kogi State Government School adoption and mentorship programme initiated by the ministry of education , science and technology and sponsored by the Auditor General Local Government, Alhaji Ahmed Usman Ododo.

The event took place at the prestigious Abdulazeez Attah Memorial College Okene (AAMCO), Kogi state with many critical stakeholders in education and students of various secondary schools in attendance.

Speaking on the need for massive support for education , the Commissioner , said the current administration led by Governor Yahaya Bello has done a lot in bringing back the lost glory of education to the state.

He said through the concerted effort of the state government, model science secondary schools across the three senatorial districts of the state have been established to boost science education. 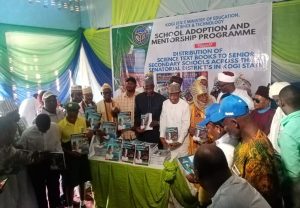 According to him “The best Governor Bello has done to uplift education which no other governor in Nigeria has done is the allocation of 30 per cent of the state annual budget to education sector even when UNESCO recommended only 26 per cent .

“The allocation of 30 per cent is the sum we have been using to develop the sector. The establishment of Confluence University of Science and Technology is to position Kogi state to benefit from national and international opportunities abound in science education”

Reeling out some of the achievements of the state government in education in Kogi central, Jones revealed that the establishment of model science school are ongoing at Ogaminana, Oboroke and Uruvecheba all in Kogi central senatorial district to encourage students to acquire science education for advancement of technology in the state.

Jones added that all primary and secondary schools in the district have been given a facelift through massive renovation and construction of more classrooms and staff rooms.

He noted that the ministry of education in collaboration with STETCOM have concluded the process of recruiting 4, 000 teachers for secondary schools across the state, stressing that the process was transparent to fish out qualified teachers.

The Commissioner commended the Kogi State Auditor General for Local Government Alhaji Usman Ododo for keying into the vision to transform the educational sector from what it used to be in the past.

“Whatever assistance you render to the education sector , you don’t do it for Governor Yahaya Bello , rather you do it for the people and the children yet unborn.

“Alhaji Ahmed Usman Ododo’s effort and support in producing science text books will forever remains indelible in the heart of the beneficiaries. I am using this medium to call on other indigene to support education sector for better tomorrow” he stated.

Earlier in her welcome address, the Director, Planning, Research and Statistics Ministry of Kogi Dr Elizabeth Animoku urged stakeholders to key into the vision of the Kogi State Government towards improving the educational sector.

She called on stakeholders to key into the school adoption and mentorship programme of the present administration, saying that, “it will help to bridge the gap in the educational intervention programmes that is needed in Kogi state”.

In his remark, the Ohi of Adavi His Royal Highness Alhaji Mohammed Irenyi commended the sponsor of the programme and urged other well meaning sons and daughters of central senatorial district to emulate the kind gesture of Hon. Ododo.

The royal father also charged the teachers to redouble their effort in ensuring that the school acquired the best knowledge in science education.

A student of Abdulazeez Attah Memorial College Okene (AAMCO) Jibril Usman commended Governor Yahaya Bello and the State Auditor General of Local Government for prioritizing education sector even in the face of the current economic doldrum.