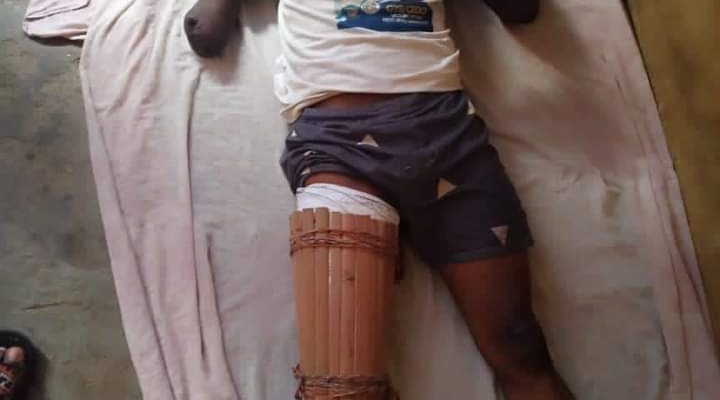 One of the relation of the amputee , Siyaka Shaibu told our correspondent that the incident occurred at about 9am on Sunday when Dauda Saidu who was riding on his motorcycle left Obehira community and involved in an accident with a commercial motorcyclist at Agassa junction opposite his workshop.

The eye witness who is also a vulcanizer added that the amputee vulcanizer was taken to a hospital at Agassa where the medical personnels who attended to him confirmed that he has sustained a bone fracture on his right leg.

As at the time of filing this report Dauda Saidu is in a critical condition in the hospital.

Speaking to our correspondent, in Okene on Sunday Abdullateef Dele the man who taught the amputee vulcanizing skill, said he wondered why this type of incident happened to Dauda Saidu who a philanthropist in the person of Natasha Akpoti has promised to change his life for better as a result of his pitious condition.

He stated that Dauda lost his father at tender age , noting that it was his mother who took care of him and his other siblings.

Dele who is also the Vice Chairman of the Association of Vulcanizer of Nigeria (AVN) Kogi Central senatorial district, revealed that the amputee who is hard working has been passing through turbulent situations in his life.

According to him “What a sadden fate that has befell this young man. I taught Dauda Saidu vulcanizing skill and he graduated after he acquired all the needed skills to stand on his own.

“Sadly less than twenty four hours for him to open his workshop in 2002 , he involved in a ghastly motorcycle accident along check point road in Okene where he lost his right arm on the spot of the incident.

“Dauda remained in Okene hospital for upward of one year before he was discharged. Being a determine person who always want to pursue his ambition, he against all odds still chose to practice his trade with one hand. Every body including me that trained him did not believe that he can still do the job after lost one of his hands.

“Alas with faith and the passion he had for the job, he was able to put body and soul together to practice the trade and through the job he was able to marry and gave birth to children some of the children are even in secondary schools.

“Ironically just four days for this young man to receive a gift of his life , a working tolls that is capable of changing his life for better then another accident came to further distance this young man from receiving the tools.

It will be recalled that the Social Democratic Party (SDP) candidate in the Kogi State 2019 Governorship election Barrister Natasha Akpoti through her philanthropic gesture acquired a multimillion naira state-of-the art equipment to be handed over to Dauda Saidu to make the operations easier and seamless.

Natasha Akpoti after receiving the German-made European Twin Busch machine in Abuja with full of excitment expressed optimism that the gesture would help to strengthen the faith of other persons living with disabilities in the truism that there is indeed ability in disability.

She however fixed 9th of December 2021 to personally handed over the machine to the industrious vulcanizer as part of the events to mark her 42nd birthday.

But sadly just few days to the long awaited date , the amputee vulcanizer involved in an accident and now on a sick bed with a broken right leg at Agassa general hospital in Okene local government area of Kogi State.